Within the past seven months, Young the Giant has performed at the MTV “Video Music Awards” and had a song featured on the hit TV show, “Glee.” You could debate that the California-based indie rock band is becoming “mainstream.” It seems the band could care less what label others try to associate with its music, so long as people listen and enjoy it.

With “Cough Syrup” covered during a scene on “Glee” where a character almost commits suicide, Young the Giant found out that there are issues far greater than “mainstream” that the band’s music can help address.

“We were a little bit confused at first that [‘Glee’] would choose one of our songs,” admitted drummer François Comtois. “Then we received the treatment and saw that it was dealing with a subject that, not necessarily like close to home, but something super important for us.”

Comtois noted that the band is big on education, and cited bullying as something that can take its toll on the psyche of kids trying to learn and develop.

“It made it a lot easier for us to say yes at that point,” he continued. “We saw [the treatment] and it was just kind of like, ‘Oh of course.’ There’s no hesitation in a situation like that.”

Despite the fact that the band is still gaining new fans off its self-titled debut, Comtois said the band is already working on new material. Young the Giant is debuting three new songs each night of its current tour, which runs through the end of April. The group began working on the tracks during a three-month break prior to this current stretch of dates, and has other songs besides the three that are in various stages of completion.

There were three big changes this year to the MTV Video Music Awards: no host, the red carpet went from white to black, and all of the arrivals were inside at the Marriott, which is next door to the Nokia Theatre.

Save those, it was another star-studded event in Los Angeles, which set a network record for the largest VMA rating in the show’s history.

– While I was updating on my Twitter and Facebook as celebrities walked by, I missed Beyonce’s big announcement that her and husband Jay-Z were expecting their first child. I did get a quick work with the former Destiny Child star, who told me she was looking forward to her performance later that evening.

“Simple and sweet,” he said of the expecting mother’s forthcoming performance. “She’s performing, ‘Love on Top,’ my favorite song off her new album.”

Gatson was unaware if the late announcement of Beyonce’s performance was due to a late addition or simply, “saving the best for last.” Of course, the impending pregnancy and announcement, which occurred during the MTV VMA preshow, could have also played a role.

– Lil Twist, one of Young Money’s youngest rappers, said that the camp was aware of Lil Wayne’s Tha Carter IV leaking this past week, but shrugged his shoulders when asked for a reaction.

“Nah, it doesn’t affect us,” Twist said. “Whatever, it comes out tonight at midnight.”

Weezy wrapped up the VMAs with an explosive performance, and then celebrated his album release at a private party in Hollywood.

– I was fortunate enough to attend the In Touch Weekly “Idols and Icons” VMA after party on Sunset Boulevard. Amongst some of the celebs there: “Entourage” and adult film star Sasha Grey, a fit-looking Kendra Wilkinson, Kat DeLuna, and my buddies Hot Chelle Rae – who divulged that the band’s follow-up single to the smash, “Tonight Tonight” will feature New Boyz.

– Andrew Dice Clay is making a comeback, in large part to his current arc on “Entourage.”

“I wanted to do it right away,” said Clay on making the decision to join. “I’ve always been a big fan of the show.”

If you watch the HBO show, you know that Dice’s classic line thus far is: “Dice does the f**king.” Was that his mentality back in his heyday?

“I still think that way,” the comedian responded.

– We all know that DJ Pauly D is usually “DTF” – but recently he took a break from his “Jersey Shore” antics to join Britney Spears on tour. The Rhode Island-native says he would talk to Spears every night.

“It was amazing,” he gushed of the experience. “The best thing I’ve ever done in my life.”

These California rockers nearly stole the show Sunday night at the MTV Video Music Awards with their performance of “My Body.” What made the performance even more compelling was the band’s company: YTG invited 250 of their closest friends on stage for the song. I played the studio version from the group’s self-titled LP on “The Ralphie Radio Show” Monday; the VMA performance is below.

I had the pleasure of meeting Jill Wilderman last June on the red carpet of the “MTV Movie Awards.” We braved the elements (a.k.a. roasted in the sun) while waiting for celebrities to walk past us and maybe, share a few words. 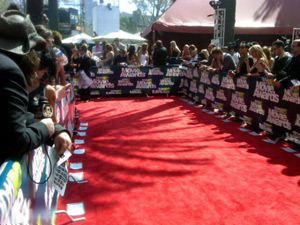 So, I figured if there’s anyone that knows what these red carpet event are really like, it’s Jill. Not only has she covered a ton, but she shared almost the exact same perspective with me at my last, and least glamorous, event. Given that I’m headed back to LA this weekend to cover arrivals at the 2011 “MTV Movie Awards” – I thought it’d be good to talk about my last visit to an awards show with Wilderman, in case you had any misconceptions about these types of things being all “glitz and glamour.” 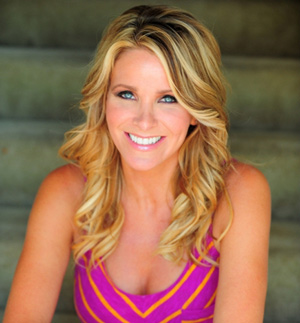 In an interview which will air on “The Ralphie Radio Show” August 22, Selena Gomez shot down a pair of rumors about her alleged involvement in a new “Sex and the City” TV series and a Britney Spears tribute planned for the 2011 MTV Video Music Awards.

The interesting thing is that Gomez calls herself both a fan of the TV show and the pop star. Although, her youth (and therefore, her mother) made watching the former a limited experience until she got older.

“I wasn’t allowed (to watch) when I was younger, so I kind of missed a lot,” Gomez said. “But I used to watch a couple episodes.”

The Disney star says the rumor of her playing Charlotte in the planned series is just that, a rumor.

Gomez probably also thinks participating in a Britney Spears tribute is an honor. After all, the starlet pays homage to Britney every evening on the “We Own the Night” tour, performing and dancing to a medley of Spears tracks. During her show, Gomez reveals the first ever concert she attended was a Britney show at age 11.

“No. That would be cool too, but no,” she responded when I brought up the reports of her teaming up with Demi Lovato, Miley Cyrus, Katy Perry, and possibly others at the VMAs next Sunday.

Speaking of Lovato, Gomez did talk about her friend’s upcoming birthday and how she’ll spend it.

“She’s having a big birthday party, and unfortunately I have a show, so I can’t go,” Gomez said. “But she’s going to have the best time and she’s going to go with one of her other really good friends. It’s going to be a good birthday.”

The full conversation with Gomez airs Monday evening on “The Ralphie Radio Show.”