AUDIO: ‘Slipped on a Banana Peel’ (Parody of Cobra Starship’s ‘You Make Me Feel…’)

Granted, this picture is from 2009, but I can hear it now… Gabe is like, “Ralphie… why did you have to ruin our song? I thought we were cool?” My bad, Gabe. 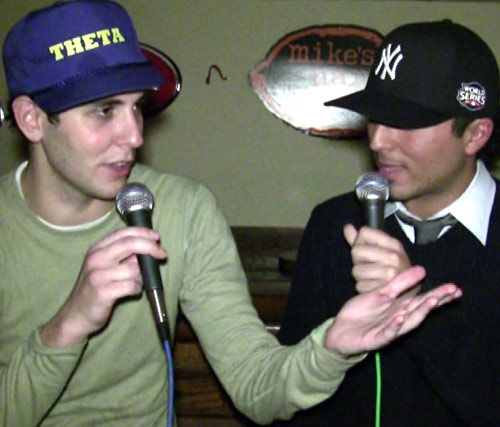 INTERVIEW: Sabi Speaks on Britney Spears, Nicki Minaj, Being ‘The Baddest Baby in the Atmosphere’

Sabi, who would eventually link with Cobra for the single, “You Make Me Feel…”says she knew about this… after Saporta also told her the same story.

“I was like, ‘Word? Nobody told me about anything!’” Sabi responded after Gabe filled her in. The singer, born Jenice Sab-bion Portlock, recently called in to “The Ralphie Radio Show.” “I was just happy that we eventually got to work together, because I was a fan of theirs. I had no idea they even knew I existed.”


But thanks to the Internet, Cobra Starship not only knew she existed, but saw her dance and heard her sing. And thankfully for Sabi, the Cobras aren’t her only famous friends: super-producer Dr. Luke is the executive producer on her debut album. The hit-maker linked Sabi with Britney Spears, and it yielded the track “(Drop Dead) Beautiful” off of Femme Fatale.

“Just watching how hard (Britney) works; there’s always people watching her and stuff like that and she still just does her own thing,” remarked Sabi about what she has admired about Spears after both recording and touring with her. “(She) dedicates herself to working out and sleeping and eating right and getting out there every night and doing this amazing show that’s like, 20 songs or something crazy like that.”

“She’s friggen bananas,” responded the singer when I asked about the rapper. “I love watching her show. I literally go and watch Nicki’s show, and then the first half of Britney’s show, because I don’t go on until the middle of the show, every night.”

And when she’s not living the life on tour with two huge stars, Sabi is flying back to Los Angeles to work with Dr. Luke on the rest of her solo LP. She recently released the first single, “Wild Heart.”

It may look like the band Cobra Starship has been enjoying one huge party since its inception in 2005. That may be the case, but after a year which included a top ten single and a worldwide tour, don’t try and tell lead singer Gabe Saporta that it’s all fun and games.

“As good as it was to break mainstream, it was a really hard year for me,” the front man said of his band’s success. Saporta checked in to “The Ralphie Radio Show” via Skype in an interview which aired Monday evening. “My girlfriend that I had since before I started Cobra Starship, I lost her and it’s a typical cliché story of you start getting famous and it just becomes too much.”

Saporta said that the whole experience – having to deal with such a tough breakup while watching his band succeed – made him hate music. Knowing that he needed some time to straighten things out, the lead singer took a trip for “self-discovery.”


“I actually went to South America for two months,” he revealed. “I lived on a little house on the outskirts of a forest in Brazil. There was electricity, it wasn’t that bad, but there was no TV, no Internet, no cell phone. All I ate was rice for ten days.”

By the end of his stay in the house, Saporta was so weak that a person would make a daily trip to his kitchen just to cook the rice. Now back in the States, it looks like the singer has returned to his comfort zone. Cobra Starship is finalizing the track listing for its fourth studio LP, and Saporta is keeping busy with studio time and promoting the band’s new track, “You Make Me Feel…”

Plus Saporta has a girlfriend, fashion designer Erin Fetherston. The singer definitely doesn’t seem to mind talking about his relationship – a change from the past.

“I think part of the reason I didn’t talk about it was because I felt like, all of the exposure from the media was tainting my personal life, and I like to keep it private because it’s so precious to me,” he explained. “But yunno, I’m thinking maybe that wasn’t the best thing because I ended up having almost two lives, and it just wasn’t very healthy.”

The singer isn’t acknowledging his personal life in interviews exclusively – Saporta notes there are more love songs than he’s “ever written… ever,” on the new LP, titled Night Shades. The first single is all about finding yourself attracted to someone else. Singer/rapper Sabi is featured on the hook of “You Make Me Feel…” The Cali-based artist started with a group popular in “jerking” circles called The Bangz. Saporta knew about her for a minute – and he actually hoped to collaborate with her on the band’s last album, Hot Mess.

“(The record label) was like, ‘You can get Leighton Meester, but you can’t get Sabi,’” he said. “I tried for a long time, for months. I don’t know why, sometimes its politics, things don’t happen. Then all of the sudden, it just kind of came back around.”

It’s pretty funny how things end up coming full circle, but given his past year, I’m sure that’s something you don’t have to try and tell Saporta either.

This is the first song released from Cobra’s upcoming album, Night Shades.

DAILY DOWNLOAD: Cobra Starship – ‘Living In The Sky With Diamonds’

Cobra Starship front man Gabe Saporta explains why the band shot a video for this song off of Hot Mess, why it cost the group next to nothing to release.

Some in the music business knew of B.o.B and his talents well before he scored a number one record and two top ten hits with his album B.o.B Presents: The Adventures of Bobby Ray. Count Cobra Starship’s Gabe Saporta as one of those people.

Saporta enjoyed B.o.B’s work so much that he asked the rapper to cameo on “The World Will Never Do” – which is the last track on Hot Mess.

“That is actually one of the songs we’re proudest of on the record,” Saporta said of the collab. “It’s the last song on the album – and that always kind of happens with Cobra records – like, I kind of start listening to our own record from track 6 onward, and the last song is always, usually, my favorite.”
—
Gabe Saporta of Cobra Starship invited “The RRS” aboard Cobra’s tour bus (which Toby Keith also uses, true story) to chat about the band’s tour with 3OH!3 and Travie McCoy along with a few select tracks from Hot Mess. In Part 2, Ryland Blackinton also joins in on the fun.

—
Speaking of tracks from Hot Mess, Cobra recently released a video for track 7, “Living In The Sky With Diamonds” – a song that departs from the party-on message in the LP’s first two singles.

“I feel like all the songs we’ve done so far, people that haven’t heard Cobra Starship yet, a lot of them are probably like, ‘Wow these guys are just like, complete douches,’” the lead singer confessed, before I asked him to elaborate. “I guess if you only hear the two songs (“Good Girls Go Bad”, “Hot Mess”) they’re both about like, kinda getting drunk and going crazy and me encouraging girls to be on their worst behavior. But, we have a sensitive side too.”

The music video was shot by a film school student in the UK. English model Peaches Geldof stars in the production, which can be viewed on Cobra’s official website and YouTube.

Did Nathaniel Motte and Sean Foreman need another reason to drink? Eh, probably not. But that doesn’t stop the band from turning March 3 in to an annual party day. Yes, the band 3OH!3 considers 3/03 its personal day of homage.

“You might as well create another drinking holiday for yourself,” Motte said on “The Ralphie Radio Show”, taking some time from the festivities to call in to “The RRS” on the band’s day of celebration. The group also planned a uStream chat with fans later. “There’s all those Hallmark holidays that they created, why can’t we make our own?”

Looking back on the band’s past 365 days, there’s a lot they can drink to. “Don’t Trust Me” hit the top of the radio charts over the summer – as Motte and Foreman toured the country headlining the Vans Warped Tour. Just a year prior, they played the festival in near-obscurity, covered in the shadows of other bands who were receiving mainstream radio love: We The Kings, Gym Class Heroes, and Katy Perry. 3OH!3 befriended the latter artist and received her help to in remixing its second single, “Starstrukk”.

Now, the Colorado natives prepare for a busy spring – a cross-country trek with Cobra Starship and Travie McCoy of the aforementioned Heroes. 3OH!3 is also in the studio finishing Streets of Gold, the follow-up album to Want. While all of this takes place, Ke$ha’s “Blah Blah Blah”, a track they’re featured on, climbs up the charts.
—
Download the mp3

—
“It’s cool. Yunno, it’s a different sounding song for a girl,” Nat noted of the Benny Blanco production. “It’s like, real sassy and she raps on it. So, I think it’s great. It bodes well for her… hopefully it’s a good sign for us.”

Working on the forthcoming LP prevented 3OH!3 from making it back to the 303 – Boulder, Colorado – Nat revealed that the group is currently in the studio with hit-maker Dr. Luke. Motte hopes to drop a single to radio right around the tour’s launch date, with an album release tentatively scheduled for late June.

And if you’re holding out for some type of last second surprise – an album release that coincides with Warped Tour dates – well, don’t hold your breath.

“Honestly, I’ve spent my last two summers in parking lots, so I’m a little excited to get out,” Nat admitted, while also crediting the summer shows with building their road experience. “It was a great tour for us man. We’ll miss it a little bit, but yunno, I think we’ll manage to have good shows and hopefully people that go to see ‘Warped’ will come to check us out.”