EXCLUSIVE: While Promoting ‘Normal Gets You Nowhere’ – Kelly Cutrone Says Whitney Port’s ‘Not So Normal’

Kelly Cutrone found out that she was pregnant on September 10, 2001. The next day, the most horrific attack against civilians on American soil took place. On May 9, 2002 – Cutrone gave birth to her daughter. Yesterday, Ava celebrated her ninth birthday, on the day that President Barack Obama announced that Osama bin Laden, the man who orchestrated 9/11, was killed by U.S. troops.

Of course, Cutrone found out the news last night in dramatic fashion: she was in a New York cab, driving with a Muslim driver through Manhattan with her daughter, when the news was announced over the radio.

“(The driver) starts crying, and we start cheering,” Cutrone said on “The Ralphie Radio Show.” “Martin (Bell), Ava’s godfather, was filming the whole thing. It was so bizarre just to have that split screen kind of reality for everyone, but at the same time, you know we all had to be sensitive about each other’s feelings because, I mean we were in a cab together going 60 blocks.” 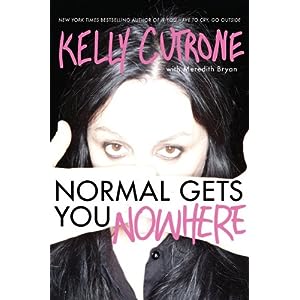 Its stories similar to that one which give Cutrone’s new book, Normal Gets You Nowhere, an appropriate title. The publicist’s life has strayed about as far from “normal” as one can – and she documents a lot of it while throwing in various anecdotes about everything from having sex with married men to ending traditional, commercialized holidays. Continuing from her first book, If You Have to Cry, Go Outside: And Other Things Your Mother Never Told You, Cutrone offers a perspective in to her company, People’s Revolution, the fashion PR firm she created. On the theme of normal, Cutrone writes that she’s dreaded every normal person who has walked through the doors at her firm. But, she didn’t dread MTV star Whitney Port.

“Whitney’s not so normal!” Cutrone insisted. “She’s funny, she’s quirky. She has a subversive side to her that you wouldn’t (expect). How can you be on ‘The City’ and ‘The Hills’ and design a clothing line and be normal?”