Leaving It All At The GRAMMYs, But Remembering To Take Something Back

I don’t like holding on to a lot of physical mementos, especially ones that would require a UPS label or a potential over-packed suitcase.

This is primarily in reference to the award shows that I cover but extends to any other trip I make or event I attend. First, I have the priceless memories of those experiences. Second, if I do save something, it’s usually a hotel room key, a press credential or a ticket stub. I’ve saved the latter since first attending baseball games and wrestling matches as a kid. I read in Rolling Stone once that Springsteen also saves his room keys and I thought to myself, “If he isn’t too cool for that then neither am I.” Press credentials are also nice because like tickets and room keys, they are small, but they are also unique.

But this past GRAMMYs, something changed. It started on my first day in Los Angeles. I attended an event that Wednesday night (something I have never done before) so I could speak with Recording Academy President Neil Portnow and Conan O’Brien. Afterwards I had drinks with a colleague and we talked about all of the various award shows and “radio rows” that I’ve had the privilege of covering. I always tell people that despite the fact I’m at a lot of these, I never assume that I’ll be at the next show and I never take any of them for granted.

The conversation I had with that co-worker drove those points home on to a different level. I hope it reflected in my work, but I and my producer can tell you it was definitely reflected in my work ethic. Don’t get me wrong, I always bust my butt on the road. But this time there was a different pace and diligence to the process. I covered events, conducted interviews, hosted shows, Skype’d in a few TV hits and edited, edited, edited which was only followed by more editing… and a lot of distribution throughout the social networks, our dot-coms and most importantly, the airwaves.

We wrapped radio row that Friday – its official title is “Westwood One Backstage” – and my producer Jay asked me if I wanted an official GRAMMYs poster that he had all of the interviewees sign. We’ve done this in the past and I almost never take it home. First, I can’t be bothered with anything that doesn’t involve completing my work for the week and second, it’s not like I can shove it in a suitcase.

But again, this time was different. And I thought to myself that a year from now, I might not be at The GRAMMYs. So maybe I should take a second to reflect, be thankful and perhaps take another memento home – one that would look pretty cool on the wall framed, I might add.

On Sunday Jay and I attended The GRAMMYs, and as we walked out he handed me a program. The GRAMMY program is more encyclopedia than playbill in size. The old me would have discarded it; but this time was different. It found its way in to my luggage, which I had to check anyways because that’s what happens when you travel across the country for a week to work. 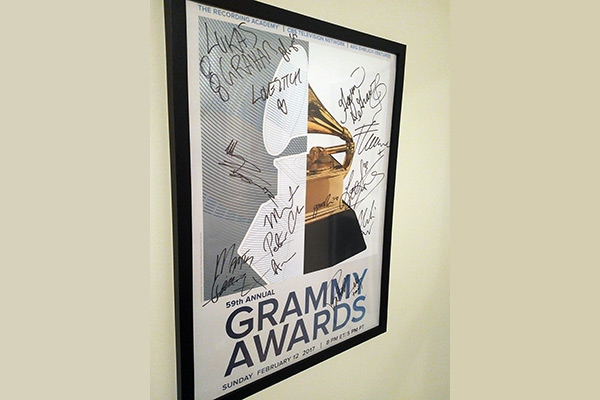 The poster made it home too thanks to the J.W. Marriott’s business center and the aforementioned UPS. It’s hanging in my bedroom.

When I had that chat with my colleague the night before radio row began, I retired back to my hotel room and told myself that no matter what happens, I better push myself to new limits and leave it all out there.

And by the end of the trip, I felt I had at the very least accomplished that… so I wanted to make sure I took a piece of it back with me too. I’m glad I did.

On my first day of coverage in Los Angeles for The 59th GRAMMYs, I attended The Recording Academy Producers And Engineers Wing 10th Annual event which honored 12-time GRAMMY winner Jack White. The artist’s friend Conan O’Brien was on hand and stopped to chat about his Patriots winning Super Bowl 51. I also spoke with Regina Spektor and Academy President Neil Portnow.