On the red carpet for the “American Idol” finale, eventual winner Candice Glover talks about inspiring others with her confidence, and Scotty McCreery gets a hello from Sir Anthony Hopkins, who apparently is a big “Idol” fan!

I stopped by WBRE’s “PA Live!” for my weekly segment, “The Ralphie Report.” This week, I recapped his Skype interview with Hot Chelle Rae guitarist Nash Overstreet and talked about a new Pepsi commercial that features music from the emcee Outasight. I also broke down Scotty McCreery’s big week a top the charts with his new album, Clear as Day.

I’m on “PA Live!” every Thursday – a new, daily show on WBRE that airs weekdays at 4 p.m. The show is co-hosted by Dave Kuharchik and Monica Madeja.

First of all… I told you so.

Now that we got that out of the way, let’s fast forward right to the end of the evening. Scotty wins, he heads to hug his family, and sure Jack Black isn’t his fam, but how you gonna leave JB hangin’ like that?! 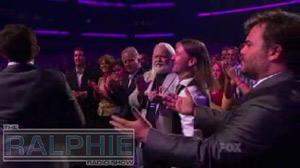 But before he left the stage, McCreery embraced runner-up Lauren Alaina. Then, they embraced a little more. Then, uh oh… 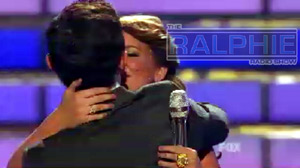 Looks like we might have a little young romance this summer on the “Idols Live” tour. Cameras quickly cut away when the two locked lips but cutting to the reaction of a shocked group of finalists on stage wasn’t the best look if you’re trying to cover this up. Perhaps the bigger question is… how jealous is Steven Tyler of Scotty McCreery right now?

Ashley Sullivan will forever live in “American Idol” lore as the first contestant to get married on the show. The Massachusetts-born singer did not make the top 40, but she made it way farther than most, and has since relocated from Lowell, Mass. to Hollywood.

In an interview which aired before Wednesday’s “Idol” finale, Sullivan predicted Lauren Alaina would beat out Scotty McCreery. Sullivan had originally picked McCreery to go the distance – even telling Scotty personally after she was eliminated that she thought he could do it. According to Sullivan, the country singer humbly dismissed her claims. But after seeing Alaina sing to her mother, the former contestant had a change of heart. Sullivan noted that because Lauren was only 15 when she tried out, her mother was with the Georgia-native every step of the way.

As for Sullivan, she is enjoying both the married life and living on the west coast as she searches for her next venture in either music or comedy.