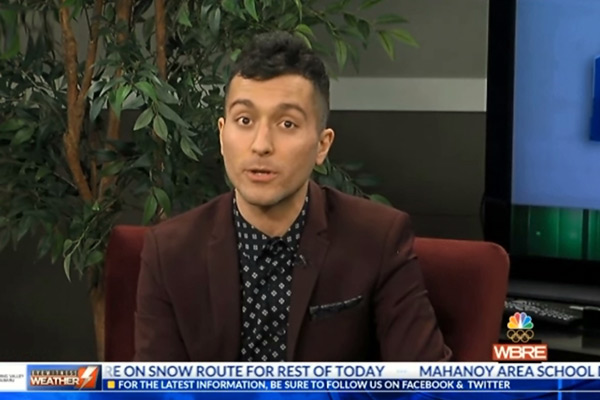 As the great philosopher Michael Gary Scott once stated, “Ain’t no party, like a Scranton party.”

And with that, let me tell you about my whirlwind weekend in Northeastern Pennsylvania.

I’ve had the honor of hosting a radio show on WBHT-FM for almost 10 years now. It was my first gig out of high school. And it let my career to places I never could have imagined (especially starting in Scranton, Pennsylvania). And last weekend, a new era of the station launched with its rebrand as “97.1/95.7 BHT” – a new name to reflect the 95.7 WBHD simulcast that covers the northern part of the market.

Straight off an all-nighter, I hopped aboard an 8:30 am bus out of Port Authority that didn’t get in to downtown Wilkes Barre until noon. I grabbed a venti Starbucks, headed to my hotel and grabbed a quick mile run on a treadmill. A hair, makeup and wardrobe change later I was out the door to my next stop: the radio station. I had to meet some new staffers, see a few familiar faces and prep for my return to WBRE-TV’s “PA Live.”

For years I checked in to the NBC affiliate’s lifestyle show with “The Ralphie Report,” a weekly recap of entertainment stories I was covering. It had been a while since I was on the show but the crew welcomed me back with open arms. I talked about the upcoming rebrand and promoted the big party later in the evening at The Woodlands.

The party lasted well in to the night, but I had to keep the train on the rails: a busy Saturday awaited me. In the span of a day I made four different stops, including PNC Field where I threw out the first pitch for the Scranton/Wilkes-Barre RailRiders game.

We ended the work day at La Tolteca, a Mexican restaurant that satisfied my Cinco de Mayo (Seis?) guac and marg cravings.

Following a quick visit to Mohegan Sun Pocono, I retired back to my room. Thankfully Sunday was a bit chiller: brunch, a bus back to the city and a nice 5.6 mile run in Central Park as the sun set on yet another eventful weekend.

I certainly didn’t need another confirmation, but that Michael Scott sure hit the nail on the head.

On WBRE’s “PA Live!” for this week’s “The Ralphie Report,” I talked about DMX and “American Idol” contestants Elise Testone and Erika Van Pelt.

On WBRE’s “PA Live!” for this week’s “The Ralphie Report,” I recapped my coverage from the red carpet of the 2012 MTV “Video Music Awards.”

I co-hosted “PA Live” on WBRE with Monica Madeja on Friday, August 24. We talked about Lance Armstrong, the volunteer efforts of a local American Red Cross chapter, and received some workout lessons from a local kickboxing studio.

I co-hosted “PA Live” on WBRE with Monica Madeja on Tuesday, August 21. We highlighted a celebrity cookbook that is benefiting a great cause, tried out “The Original Toothpaste Dispenser,” and I broke the news to Scranton that “The Office” is entering its last season.

I co-hosted “PA Live!” with Monica Madeja and interviewed “Mr. Hush” movie director David Lee Madison and actor Brian O’Halloran, kids from the Kiss Theatre Company’s production of “Les Miserables”, and offered my opinion on some of the ridiculous nicknames being considered for the Scranton/Wilkes-Barre Yankees when the team moves back to Northeastern Pennsylvania next year.