Archives For the wanted

“All Time Low” will serve as the first American single from The Wanted’s first worldwide album, due out this year. The LP will coincide with “The Wanted on E!” – a new reality show set to debut this June.

Max, Nathan, and Siva talked about the busy year ahead Backstage at The GRAMMYs on “The Ralphie Show.

The five fellas who comprise The Wanted are moving in to a Los Angeles home for a new reality show set to debut later this year on E!. Max George, who has been romantically linked to Lindsay Lohan, wouldn’t exactly say whether the actress would be making cameos throughout the first season’s run.

The Wanted’s Siva Kaneswaran interjected rather quickly after hearing the question about Lohan, telling George, “I don’t think you’re going to have a choice.”

George has become the de-facto front-man for the faction since his relationship to Lohan entered the headlines. The two insist they’re not dating.

“I’m not spilling any beans!” George replied when I asked what trouble his band-mates are getting in to, considering he takes the majority of the heat for the group. “Unless there’s a camera in my bedroom, then you might see.”

The TV show will follow the guys’ personal lives and in to the studio, where The Wanted will record its first worldwide, full-length album.

“We’ve been writing this album for two years because we didn’t put an album out last year,” George explained. “’All Time Low’ was our first single in the UK, and it’s one that we love.”

The track serves as the next American-released song for the boy band. George said the band moves in to their new digs in about two weeks, with the premiere of the show set for this June.

These guys will be opening up on select dates of Justin Bieber’s tour (still no idea which ones) and will also hit up South America before year’s end.

“I have to abide by the law and behave myself,” a suddenly semi-serious Sykes said. “So, unfortunately, currently in the States, I am not drinking (alcohol) at all.”

Before One Direction and The Wanted, before N’Sync, the Backstreet Boys, and 98 Degrees, there was New Kids on the Block. The music between the aforementioned acts spans three decades, and New Kids singer Donnie Wahlberg is happy the genre has exhibited staying power.

“In some ways, [One Direction and The Wanted] validate us,” the NKOTB star told me via telephone. “And I think our reunion has validated us in many ways as well. The fans that grew up with us came back.” 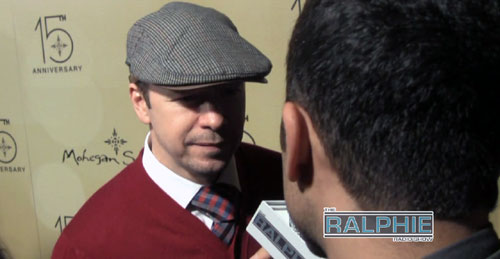 Wahlberg speaks proudly on not just his group’s return, but also the new generation of fans that have new music to grow up with.

“I think there’s a place in society for all different types of music,” he explained. “I’m glad that the young bands are coming out now and doing well because I think it validates what we did 25 years ago.”

Generations will collide August 17 and 18 in Hershey, PA, when New Kids on the Block, the Backstreet Boys, The Wanted, Kelly Clarkson, LL Cool J, and more converge on Hersheypark Stadium for the inaugural “Summer Mixtape Fest.” While Wahlberg seemed happy to speak about the state of pop music, he channeled personal experiences when commenting on the groups specifically.

“My opinion or my advice to them is really inconsequential,” Wahlberg stated, before offering his reasoning. “Yunno, the same way when I was 19 and they interviewed everyone from The Monkeys to Donny Osmond to one of The Beatles to whomever to give advice or to ask what they thought of us. When I was 19, I didn’t care what any of those guys thought about me.”

At 42 years old, it is easy for Wahlberg to reminisce on the path his group helped blaze given New Kids’ past success. The trip down memory lane becomes a little sweeter though when you factor in the group’s current run, which has lasted since 2008 and brought the band to new destinations that none of them thought were possible.

“It’s a really humbling experience; it’s been an amazing journey,” Wahlberg, who will turn 43 on the first day of the festival, said. “[The reunion] sort of turned a 19-20 year-old sort of college age experience that I look back on fondly in to a very mature and different experience now.”

The experience continues to play out, as New Kids will tour across five continents in 2012.

The Wanted has a lot of momentum on its side, coming off the hit single “Glad You Came.” Entertainment Reporter Jill Wilderman talked about the UK boy band and its recent performance on NBC’s “The Voice.”

Wilderman also reported on what manager Scooter Braun and artist Justin Bieber are saying about the boys and their music.

The follow-up single to the number one smash hit “Glad You Came” from the UK’s The Wanted.

AUDIO: ‘What Is Your Name?’ (Parody of The Wanted’s ‘Glad You Came’)