At the turn of the New Year Black Eyed Peas founding emcee Will.I.Am. tweeted that in 2015, BEP would return with new music. However if you’re seeking for new music from the quartet, look no further than Apl.de.Ap. The artist has kept busy since The Peas’ hiatus through charity work, his record label, and filming “The Voice” back in The Philippines. Apl is also working on a solo album and dropped the first single in January.

“Be” features Canadian-Cambodian rapper Honey Cocaine and singer Jessica Reynoso, who was on Apl’s team during season one of “The Voice PH.” Parts of the music video were filmed in Manhattan and Brooklyn last October.

“It’s about really being yourself,” Apl said of the track when we caught up with him during the video’s production at PH-D Rooftop Lounge atop The Dream Downtown Hotel in New York’s Chelsea district. “Sometimes in the music business you’re always trying to conform in a music genre. In the history of the Black Eyed Peas we’ve gone through different music genres… at the end of the day, you always go back to who you really be.”

For Apl – that’s hip-hop, evident in both his and Honey’s verses. Reynoso’s vocals on super-catchy hook add a nice touch to the song.

“Be” serves as the first single from the forthcoming AP3, due out this year. Just between his charitable efforts, “The Voice,” and the various music projects he is attached to, Apl is already set for a busy 2015.

But the Filipino surely is also looking forward to this May, when his fellow countryman Manny “Pacman” Pacquiao takes on Floyd “Money” Mayweather in Las Vegas. If his music endeavors are as fortuitous as his boxing predictions, then it should be a great year for the emcee; Apl told me last October he believed the two would eventually get in the ring to give the fans the fight they’ve been asking for.

Apl.De.Ap of The Black Eyed Peas stopped by “Ralphie Tonight” and talked about the efforts with his foundation to help rebuild The Philippines following last year’s typhoon.

Apl also gave an update on his music projects and revealed that the Black Eyed Peas still have a couple of albums to release.

how cannot you not appreciate the genius that is will.i.am.?

a black eyed pea gets married… 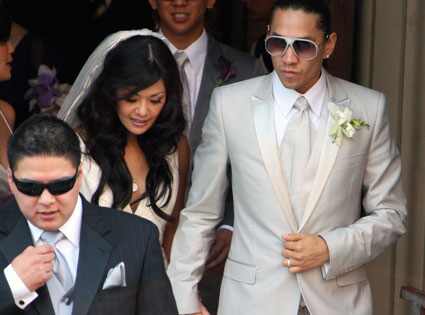 all of the peas were in attendance – with will.i.am. and apl.de.ap. as groomsmen. tab tapped bep manager polo molina as his best man.