Despite Monday’s Lady GaGa/Jason Derulo show being postponed, the “Whatcha Say” singer still made time for The RRS, chatting for the first time about GaGa’s tour changes and appearance on “The Oprah Winfrey Show.” Derulo also dropped some knowledge about hit self-titled LP, which hits stores this March. 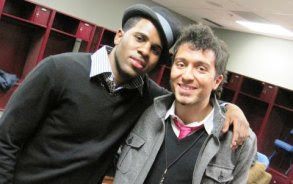 20 Things That Happen In 1 Minute

I find this fascinating… a graphic from of all websites, i-am-bored.com, that depicts 20 different events that take place in the US in just 60 seconds… damn, must be nice to be Oprah!

After Chris Brown voiced his displeasure with the actions of Oprah, the talk show host released a statement to TMZ.

how cannot you not appreciate the genius that is will.i.am.?

kanye and oprah – hand in hand.

throw the partisanship out the window for a second, this is pretty cool.

heck, any moment in time where kanye is answering questions for oprah is notable.

mimi drops her CD, some weight…

“Mariah Carey says she’s feeling better than she’s ever felt. The singer appeared on yesterday’s “Oprah Winfrey Show” to talk about her weight issues and her new album. When it comes to her size, Mariah admits that she has slimmed down to the same pants size she wore in high school. But she says it’s not about numbers, it’s about, quote, “feeling good and being comfortable in your own skin.” Mariah credits her fitness and nutrition coach, Patricia, for helping her get into shape. As for the new album, Mariah has songs that deal with her former marriage to Tommy Mottola and the death of her father. Mariah says, quote, “I almost feel like it’s my job to write these kinds of songs for everybody who will go through it.” Her new CD, “E=MC2,” hits stores today.”