So, I performed a couple quick Google searches and they yielded the following: “Took My Love” was actually a track off Pitbull’s last album, Planet Pit. The production credit went to RedFoo (one half of LMFAO). DJ Buddha grew up in New England and is an A&R for Pitbull’s label, Mr. 305 Inc. This track is being released as Buddha’s record, which leads me to believe that either he remixed it and/or he was responsible for it all coming together for Pit’s LP. Regardless, it’s dope and a great song. 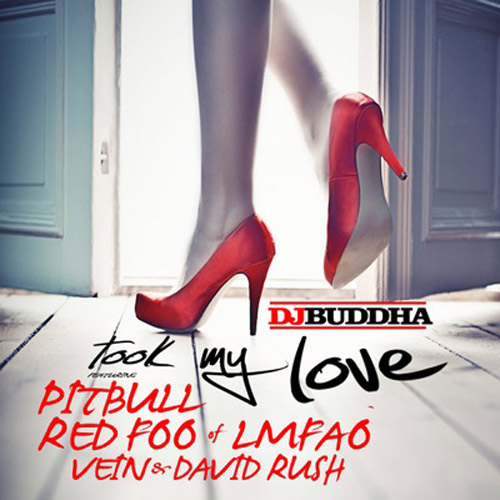 David Rush is signed to Pitbull’s Mr. 305, Inc. While the “Give Me Everything” rapper had an all-star type year in 2011, his artist’s past year and a half could be considered even more spectacular.

Rush, who first linked up with the Miami emcee on the 2007 track, “Go Girl,” received a kidney transplant, got married, and welcomed a baby son in to the world all within the span of about a year. Apparently that isn’t enough for Rush, who now returns to the music scene with “She Ain’t You,” an up-tempo single that features Jason Derulo crooning on the chorus.

“I work hard,” Rush stated from his New Jersey home in a Skype interview on “The Ralphie Radio Show.” “But now, it’s like I’m working not just for me, not for my wife, but just our son and it’s another inspiration, another reason to wake up, another reason to get what I want.”

The Jersey-native’s story is an inspiration in its own. Rush dealt with kidney issues for years, and traveled across the country supporting Pitbull on a 40 date tour with a dialysis machine in tow, used every night at every hotel room he stayed at before performing. The artist earned the distinction of the first person to successful tour cross-country with the piece of equipment.

In November of 2010, Rush received a kidney transplant from his brother, who also doubles as the rapper’s road manager. Currently, Rush is healthy, and ready to arrive back in DJ crates with a single that he says “fell on to his lap.”
—
David Rush f. Jason Derulo – “She Ain’t You”

—
“Mr. 305, they always want (their artists) to produce hits,” Rush explained. “We had an opportunity to get the record; I sent it back as a reference, not knowing where it was going to go.”

“She Ain’t You” struck Rush as such a big song he literally couldn’t wait to finish it, sending back the first treatment about two hours after it hit his e-mail. He didn’t even realize Derulo was on the hook until after he wrote to the track. Thankfully, Pitbull’s camp and Pit himself also liked the track, and made the necessary calls to secure it for their artist.

And despite his large amount of success and superstar status, Pitbull is just a call… or rather, text message, away from Rush at all times.

“He’s usually a great texter,” Rush said of Pitbull. “Calls is another deal. But text message, I can guarantee a text message or e-mail response within a day. Even if it’s just a, ‘Hey, what’s up?’ or ‘Chico, rooting for you,’ you know what I mean?”

He’s the teacher and the student – the leader and the follower. It is this trait that helped Miami born emcee Pitbull reach the top of his game, with back to back top 10 singles, his first LP distributed by a major label, a world tour, and many more cameos on the horizon.

On this particular night, Pitbull, real name Armando Perez, plays the role of teacher. Pitbull provides for his crew, which features your typical litany of managers and stage hands, along with a band and DJ. Pit’s company, Mr. 305 Inc., fronts the money for expenses incurred. The crew chows down on a mix of fried chicken and salad, with a conservative selection of beer, liquor, and soda. In the back of the tour bus, also covered by Pit’s company, where a second flat screen and video game system are stored, I plop down on the leather couch. There, I’m joined by the Miami emcee and another one of his students, David Rush.

“It’s like going to college for free,” described Rush of his jaunt on “The Rebelution Tour” – which bears the name of Pit’s recent release on Mr. 305/RCA. Rush, who is also known as “Young Boss”, wrote and appeared on the club banger, “Go Girl”. Every night of the tour, Rush joins Pit on stage for the track. However unlike most opening acts, the Jersey native sticks around for the entire set.

Pitbull feels Rush is someone who “knows how to make hit records,” as opposed to just someone who may “stumble over” a hit. But in addition to the creative side, Rush is learning the business aspect of the industry as well – as Pit balances both the demands of his own company and of the record label’s.
—

—
“I’m out here on my own dime. The label ain’t give me no money for this right here,” revealed Pit. “But to me, I am my biggest investment. Not that the label is treating me bad or anything like that, not at all, they just lettin’ me do what I do.”

What Pit has done is continued and extended the grass roots movement he started in 1997. From the outset, there doesn’t seem to be a magic formula to his success. Pitbull works 24/7 – rarely one to turn down any type of request – whether it’s for an interview, a record cameo, or an autograph. The “on-the-grind” mentality combined with the reliability of the person himself, mixed with a lucky break here and there – has landed Pitbull both street cred and mainstream notoriety, a tough status that only few artists obtain in this day and age.

But after speaking with the emcee, you realize there is one other ingredient to his successful recipe – the hunger and desire to continue to learn. This became evident when I asked Pitbull about his recent collaboration with Jennifer Lopez, who is now releasing music under her alter-ego, “Lola.”

“’Lola’ is what Marc Anthony calls her,” said Pit. “To work with Jennifer Lopez was an honor. Especially someone that’s opened the doors for the Latin’s the way she’s done it in the movie industry, in the music industry. More than anything, I watch them and I learn, yunno? And I’m studying, also.”

The Jennifer Lopez collaboration is just one of many on the way for Mr. 305 himself – also on the docket – tracks with Shakira, Kristinia Debarge, and Janet Jackson. Plus, similar to the Livvi Franc track – you never know what Pit will just hop on.

“Right now I’ve been on tour, since I’m the one funding the bus, I don’t get the studio bus,” he joked. “There’s a lot of riddims out right now, that don’t nobody really know about. I’m about to f*ck ‘em up!”

03.12.09 : David Rush f. Kevin Rudolf, Pitbull – Shooting Star (LMFAO Party Rock Remix)
Love the original and the remix, which David had his manager send to my personal GMail account (I know, a bit of name dropping there).