RedFoo and Sky Blu of LMFAO will spend 2013 working on solo music projects. The “Party Rock” duo continues to insist that the split does not imply any bad blood between the two, who are actually related.

“Me and Sky Blu were always solo from the beginning,” explained Red Foo on “The Ralphie Show.” “We put our solo stuff together. We always made solo stuff, even in LMFAO.”

The next layer to their relationship is the fact that RedFoo is Sky Blu’s uncle.

“We’ve been around each other for 26 years,” continued Foo, born Stefan Gordy. “As family… you might not see your nephew for two or three years.”

“We just want the world to know us as individuals before we come back together,” the artist born Skyler Gordy said. “Before you knew what LMFAO was, you didn’t want LMFAO. So now me and Foo are going to show you what’s new in 2013 on our solo efforts, and then we coming back together.”

So, enjoy the solo tracks from the two, such as Foo’s “Bring Out the Bottles,” and Blu’s “Pop Bottles.” And rest easy, because next year LMFAO will be back to bring us even more songs about bottles, like “Bring Out and Then Pop Bottles.” If they duo wants to use that as a working title, I won’t hold them to any royalties.

Sky Blu introduced me to the singer featured on this track, Mark Rosas, and talked about his solo music on “The Ralphie Show.” 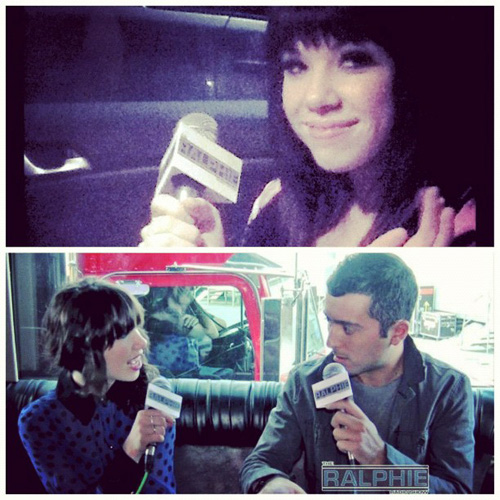 The artists, who share a home through Interscope Records, were heading in separate directions, but exchanged numbers. After countless text messages and e-mails between the two and Jepsen’s boyfriend Matthew Koma, “This Kiss” was written and produced. The track serves as the third single from Kiss.

DAILY DOWNLOAD: Madonna f. Nicki Minaj – ‘Give Me All Your Luvin (LMFAO Remix)’

LMFAO remix > original track. Not even close. This might save Madonna from having a first single that tanks.

Congratulations to LMFAO. The party-rocking duo scored another number one hit in the U.S. with “Sexy and I Know It.” With the group’s latest chart-topper, LMFAO entered an interesing group of artists that includes…

Those four acts are the only ones ever to have a song reach number one on Billboard chart with the word “sexy” in the title.

AUDIO: ‘I’m on the Phone But You’d Never Know It’ (Parody of LMFAO’s ‘Sexy and I Know It’)

Seriously, take the Bluetooth piece out of your ear, thanks.

Rosh Hashanah is the Jewish New Year’s, and is right around the corner. So, here’s a Kosher-friendly spoof of the summer’s biggest song. Mazel Tov!

Here’s another spoof, this time paying tribute to outgoing Apple creator Steve Jobs with a parody of Jay-Z’s “What More Can I Say?” off The Black Album.

And speaking of Jay-Z, if you missed State Farm’s Spike Lee-directed commercial for September 11, continue scrolling and hit play.

Next single from Sorry for Party Rocking… which clearly, is far from a sincere apology.

03.12.09 : David Rush f. Kevin Rudolf, Pitbull – Shooting Star (LMFAO Party Rock Remix)
Love the original and the remix, which David had his manager send to my personal GMail account (I know, a bit of name dropping there).