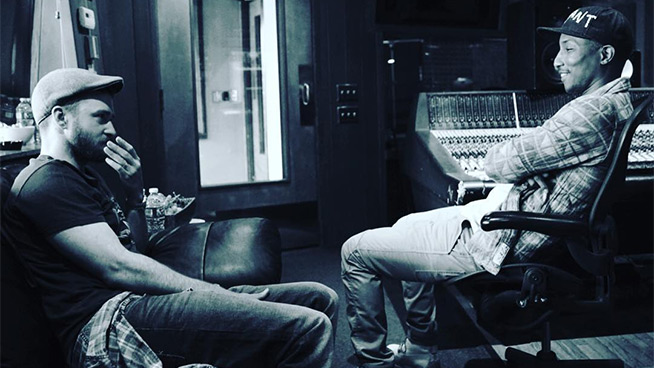 A friend of the show, TheKnockturnal.com Editor Shaina Moskowitz called in on this “Media Monday” to talk about her coverage of the Tribeca Film Festival, including an after-party with Jason Bateman that she invited yours truly to and a hilarious exchange she had with a one Justin Timberlake!

I joined the PIX 11 Morning News to chat about the best celebrity Instagram photos from the past week. Highlighted pics included celebrities like Justin Timberlake, Jessica Alba, and Neil Patrick Harris.

INTERVIEW: One Direction’s Niall Horan On Being Nominated With Taylor Swift And Justin Timberlake

One Direction’s Niall Horan talked with me on the red carpet of the American Music Awards to talk about the band’s new album Midnight Memories and their night ahead at the AMAs. The quintet performed “Story Of My Life” and took home an AMA. Horan also spoke about the group’s nomination for Best Album Pop or Rock with Justin Timberlake and Taylor Swift.

Justin Timberlake will release the second half of songs he wrote over a year ago with Timbaland on September 30. It all happened during a whirlwind month when over 20 songs were worked on within a 30 day period. The 20/20 Experience 2 of 2 will actually feature 11 songs instead of 10 as on the first installment, because Timberlake simply wanted to release more of the music they created. On Friday, the second single from part two, “TKO,” hit iTunes.

“Tim and I went in (to the studio) over a year ago with Rob Knox, Jerome Harmon… a bunch of great producers,” said Timberlake via telephone on “The Ralphie Show” earlier this month. “I just told them, I said, ‘Look, I don’t have any expectations for this music even coming out. Let’s just write a bunch of music and have fun doing it and keep it to ourselves.”

Timberlake teased in an open letter to fans that the album only marks the second of four quarters in the process of his new journey. Outside of the LP, the only other known item on Timberlake’s agenda is his upcoming solo arena concert.

Justin Timberlake is set to release The 20/20 Experience 2 of 2 on September 30. The album is the second installment of a group of songs that the superstar created over a year ago. At the time, there was a chance that the material would never see the light of day.

“Tim and I went in (to the studio) over a year ago with Rob Knox, Jerome Harmon… a bunch of great producers,” said Timberlake via telephone on “The Ralphie Show,” referring to producer Timbaland. “I just told them, I said, ‘Look, I don’t have any expectations for this music even coming out. Let’s just write a bunch of music and have fun doing it and keep it to ourselves.”

Joking that the group prevented leaks by simply taking their hard drives or threatening people, Timberlake and company went to work. They produced 30 songs in 20 days without even a murmur that something was brewing. The result is The 20/20 Experience, and an experience in creating music that pushed Timberlake in to a new mindset.

“I actually think taking such a conscious break from FutureSex/LoveSounds up until last year… you recharge your brain in a way where you come in with all of these ideas for songs,” he reflected of the process. “I think that’s why we ended up with so much material.”

Originally The 20/20 Experience was to consist of 10 tracks on each of the proper, standard releases with bonus material on deluxe editions. The second LP now includes 11 songs on the final track listing because Timberlake simply wanted to share what he created. With the album and supporting solo tour on the horizon, the singer agreed that this entire year back in music has reinvigorated his interest and desire to write, record, release, and tour behind albums.

“I would go even further to say yunno, it’s always been my first love,” Timberlake noted. “I feel like now we have something to say, and that’s why we decided this was the year to do it.”

Timberlake also had a thing or two to say a few weeks ago during his performance at the 2013 MTV Video Music Awards. During his 15 minute medley, the singer replaced a line in “Sexy Back” with the adlib, “I still run this bitch!”

“Um, yeah… we get amped up some times,” Timberlake said of the comment. “That’s all I can say.”

When asked about watching performances from Lady Gaga, Miley Cyrus, Robin Thicke, and Kanye West before taking the stage and making the comment, he elaborated.

“I think all of those people you mentioned, on stage and off, we’re different versions of ourselves,” Timberlake explained. “It’s meant to be taken with a grain of salt but if there was ever a time I guess I could proclaim that, it would be when you’re mentioned in the shadow of Michael Jackson.”