TLC’s Chilli called in to chat about the group’s tour with En Vogue, upcoming final studio album, awkward moments on stage and those Nick Cannon rumors. 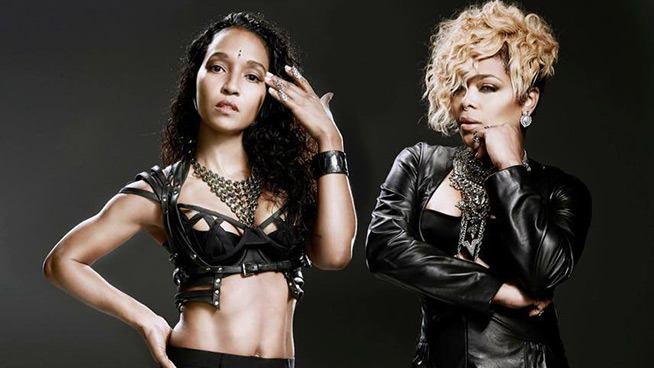 Check out TLC and En Vogue on tour later this month: September 25 at the NYCB Theater in Westbury, N.Y. and the 26 at the Wellmont Theater in Monclair, N.J.

Life & Style Weekly reports that Mariah Carey and Nick Cannon have put forth a united front for family members, catching them off guard with recent news that their marriage is in trouble. Senior News Editor Jordi Lippe also talked about Selena Gomez and Jennifer Lopez on “Ralphie Tonight.”

The top-selling female artist of all time is heaping some big praise on to the new host of “The Tonight Show.”

“I feel like he’s legendary,” Mariah Carey said of Jimmy Fallon to “The Ralphie Show.” The interview was taped just after Carey filmed her cameo on Fallon’s first night. “He’s just such a good person.”

Fallon’s demeanor probably explains why so many big names were in attendance not just for the inaugural show, but throughout the week.

“After you’ve been interviewed by so many different types of people, different types of shows,” Carey continued. “And I’m sure as someone who interviews celebrities, you have your favorites and you feel a connection with. He’s one of those people. He really does it all.”

Carey is multi-talented herself, although at the moment her main professional focus is on her yet-to-be-titled 14th studio LP. It is due out May 6, and the singer revealed that the track listing is complete.

“I added three new songs,” she said. “I felt like the journey was not yet complete as a songwriter.”

The “We Belong Together” songstress says collaborators include Nas and Wale on the artist side, and Jermiane Dupri, Rodney Jerkins, and Hit-Boy for songwriting and producing credits.

“There’s a lot of up-tempo, fun, happy moments,” she said, “and yet, there are those moments of complete and total misery.”

Carey dealt with a bit of her own misery in the process, thus the album’s delay. In June Carey dislocated her shoulder while shooting a music video. She is feeling better but is still recovering from the injury.

“Well, if we’re pushing the date anyways, I can sing,” Carey explained of her reasoning to add the new tracks a few months ago. With those songs, the artist feels she is now ending the album on a proper note. “Thank goodness I can move my arms now… it’s been rough.”

The singer last released an album prior to the birth of her twins, Moroccan and Monroe. The affectionately titled “Dem Babies” turn three in April, a month in which Carey will also celebrate her five-year wedding anniversary with Nick Cannon.

“I would say it’s very busy yet festive,” she described of this time of year. Carey also celebrates a birthday in March, although she exclusively refers to them as “anniversaries.” “The week of my anniversary, which would be the day that people might celebrate me being born, Aretha Franklin, Billie Holiday, Sarah Vaughan, Diana Ross…”

All of those singers, along with Celine Dion and Chaka Khan, share a birthday week. Carey didn’t even realize it until she taped the first ever VH1 “Divas” special with Franklin, who said, “Like the sense of humor; typical Aries.”

Carey was in shock and awe. “The Queen of Soul” knew this little girl from Long Island’s birthday. You could say it’s the stuff that legends are made of.

Life & Style Weekly reports that Kim Kardashian and Kanye West may be drifting apart. Senior Reporter Andrew Nodell also talked about Nick and Mariah renewing their vows and the wedding bands that Chad Kroeger and Avril Lavigne picked out on “The Ralphie Show.”

Life & Style Weekly reports in the magazine’s latest edition that Mariah Carey and husband Nick Cannon, along with their twins Morracan and Monroe, are living the good life! Senior News Editor Jordi Lippe talked about the exclusive photos and also covered stories regarding Jay-Z/Beyonce and Justin Timberlake on “The Ralphie Radio Show.”

Seth MacFarlane threw his annual birthday bash last Saturday, and Entertainment Reporter Jill Wilderman divulged who was there and what went down on “The Ralphie Radio Show.”

Jill also chatted about covering Nick Cannon’s HALO Awards, where she had the chance to speak with Cannon and Jason Derulo.

Twas a big week for Life & Style Weekly as a pregnant Mariah Carey graces the cover of the magazine’s latest edition.

EXCLUSIVE: Nick Cannon Discloses The Typical Hours He Works; Says He’s ‘Too Young To Burn Out’

Morning show radio host, Las Vegas resident club DJ, network executive, TV personality, artist with a forthcoming album release… Nick Cannon is a man of many, many titles. But, things aren’t any less busy at home for the mogul, as he and wife Mariah Carey are expecting twins at any moment. Clearly time management is a priority for Cannon, but that isn’t the only trait that helps him get accomplish everything.

“Man, I just don’t sleep,” Cannon admitted in a phone interview which aired Thursday night on “The Ralphie Radio Show.” The conversation was taped Wednesday morning, as Cannon traveled presumably from his gig at New York’s 92.3 NOW-FM to TeenNick, where he serves as chairman of the channel. “Literally, this is my nap time right now, in the car going to my next job.”

But Cannon isn’t complaining about the long hours and copious amount of responsibility – if anything, it’s the exact opposite. The personality says he feels “blessed.”

“I’m too young to get burnt out,” Cannon believes. “I’m not out doing myself. I’m not tired or anything like that. I just love what I do. I always say, ‘My vocation is my vacation.’”

But the hours he puts in are far from vacation-like. Cannon revealed that his day usually begins well before the sun rises.

“On the average, I walk in to the house around 9 (p.m.),” said Cannon on the length of his usual work day. “From there it’s just quality time with the wife or the studio ‘til I’m back up at 2 o’clock in the morning.”

By “studio” you could only assume it’s of the recording variety (as opposed to the radio type), as Cannon readies not one, but two albums. Mr. Showbiz, a comedy LP, will drop May 14. The follow-up, Mr. Showbiz Sings the Hits, follows later in the year. The rapper says both are finished.

“It’s going to have ‘Famous’ on it and a bunch of other stuff,” Cannon noted of the music portion, mentioning the lead single that features Akon in the process. “I worked with Flo Rida, Snoop Dogg, Roscoe Dash, everybody… Cee Lo (Green)… it’s crazy.”

The first track is a tongue-in-cheek take on everybody wanting to achieve fame in this day and age. But Cannon isn’t knocking the notion.

“I love (fame),” Cannon quickly replied after I asked him if the notion of “celebrity” and fame is overrated. “You got to just know how to handle it. Everything’s in moderation. Some people get sucked up in to it, but I mean the perks that it comes with are beautiful.”

It seems these days, the only thing not in moderation for Cannon is the amount of work that he is willing, and more importantly able, to take on.