INTERVIEW: Parade Of Lights On ‘Golden’ And Ties To Big Time Rush

Electro-pop band Parade Of Lights stopped by 95.5 to chat about the success of “Golden,” the album Feeling Electric, and the band’s ties to Big Time Rush and Metro Station. 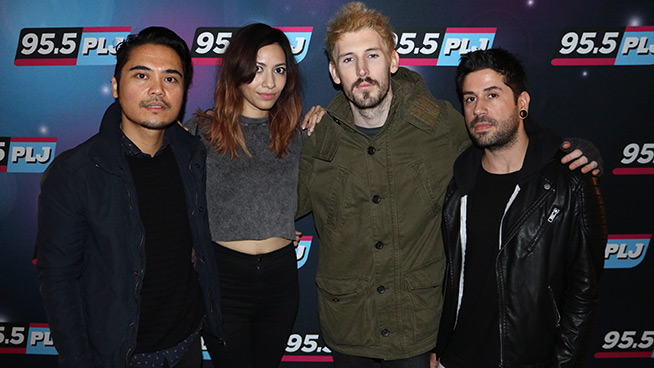 The bands were managed by the same company, recorded with the same label, and fell under the same genre of pop-rock filling mainstream radio. So maybe it’s only right that Boys Like Girls front-man Martin Johnson shed some light on the recent break-up of Metro Station.

“Trace (Cyrus) kicked every member out of the band,” replied Johnson, referring to Miley’s older brother and Metro Station’s lead singer, after I asked him about the alleged break-up. “That’s all I have to say about that.”

Rumors began circulating of Metro Station’s demise following the cancellation of a college date at Towson University. Cyrus along with Mason Musso later announced the band would be placed on an “indefinite hiatus.” Soon after, Cyrus announced via his Twitter page that he would still release music with a new band.

Johnson, along with BLG band mates John Keefe and Brian Donahue, called in to “The Ralphie Radio Show” last week. The Boston-based quartet (Paul DiGiovanni was not on the line) was in Los Angeles, amidst a flurry of promotion for the latest single from Love Drunk called “Heart Heart Heartbreak.”
—
Download the inteview

Ralphie with Martin and Paul from Boys Like Girls, Nov. 2009

—
“We cashed in our one auto-tune card,” joked Johnson about the vocal effects heard on the new single. Boys Like Girls filmed the music video for the song on the West Coast. The group also appeared at the Kids Choice Awards, stopped by Seventeen Magazine, and performed on “Lopez Tonight.” Donahue noted the experience on the new George Lopez show differed from the band’s other late night TV cameos.

“It’s so relaxed,” said the bassist. “By the green room, George has Astroturf… it’s set-up like a putting green. You can work on your short game before you go on TV.”

Who knows when the guys will have any time for golf. The band is prepping for another promo run, and then “The Bamboozle Road Show.” The tour includes Good Charlotte and Third Eye Blind. If any date on BLG’s calendar is circled, it would be June 27 – when the tour hits the Comcast Center near Boston. Keefe grew up in Mansfield, MA – the actual town of the venue. He didn’t have to join a band to grace the stage there either.

“I graduated on that stage,” the drummer reminisced. “My first show there, I saw David Bowie and Nine Inch Nails. That will always be a big thing for me.”