In the inaugural edition of “Weekend Scoop,” we catch up with the four acts that played this year’s “Summer Kick-Off” at Jenkinson’s in Point Pleasant, N.J. and find out what they are looking forward to with the unofficial start of summer. To see more from this year’s Kick-Off, click here. 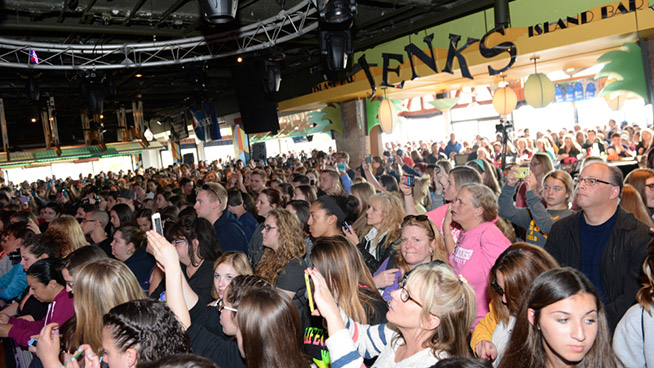 “Weekend Scoop” will feature different artists, magazines, TV stations and more every week – reporting on subjects ranging from celebrity news to events you need to know about. Catch it every Friday on “Ralphie Tonight.”


The guys also explained where De’Mar Hamilton was, revealed they have yet to meet upcoming tour-mate Rob Thomas and talked about the recent ruling in favor of Martin Gaye’s family surrounding the song “Blurred Lines.”

The Plain White T’s attempted to channel the joys and inspirations of the band’s youth for the latest LP, The Wonders of the Younger. But you may be shocked to discover that next year, PWTS celebrates its fifteenth birthday. Don’t worry, you’re not the only one. Lead singer Tom Higgenson can’t believe it either.

“Wow, holy cow,” a shocked Higgenson replied when I informed him of this on “The Ralphie Radio Show.” “It doesn’t (seem like 15 years). But yunno, we started right out of high school, just a local band playing local shows.”

Now they play across the states – far away from the band’s Midwest roots. But Higgenson and company are very much still in touch with Chicago – and perhaps still a little touchy on the subject of Bears’ quarterback Jay Cutler. The QB came under criticism last month during the NFC Championship game for sitting out the second half with an injury.

“I think he was really hurt,” the lead singer said in defense of Cutler. “He’s a tough guy. He fought through a lot – a couple concussions through the season.”

Higgenson knows a thing or two about “toughing it out” on the road – he’s no stranger to evening performances, after-show media, and early morning radio visits. According to the front man and Tim Lopez, there’s no alternative to playing hurt while on tour. Lopez has been with PWTS for about half of the almost 15 year-run, and plays the role of lead singer on the band’s latest single, “Rhythm of Love.”

“In the past we just had (Tom) sing,” said Lopez of material he wrote with Higgenson for the T’s prior to “Rhythm.” “This time around, the songs were personal and thankfully I turned in demos that were… they almost sound like the songs sound now on the record.”

Lopez and Higgenson concurred that the quality of the demos is what sold the band. Ultimately – it was Higgenson’s call, and after cutting his own vocals for the song, he even decided Lopez’s voice belonged on the track.

I suppose, like Jay Cutler, it’s all about picking your spots.

Tom chats about being sick on the road, playing Jimmy Fallon, and more!