On Monday I joined HLN’s “The Daily Share” to chat about Norm Macdonald as the new Colonel Sanders, Tim Tebow’s return and more. Thanks to my friends at HLN for having me on!

When One Direction and BuzzFeed join forces, even inadvertently, almost anything is possible.

Excuse the hyperbole, especially given that there’s only one instance of this… but still! Burger King not only brought back its chicken fries but released a second version this summer because of the boy band and the website.

This story traces back to January of 2014; yes prior to Zayn leaving 1D (moment of silence). BuzzFeed published an article titled, “35 Foods From Your Childhood That Are Extinct Now.” BK’s chicken fries, which the restaurant chain sold between 2005 and 2012, made the cut.

Fast forward to the following May: Liam Payne of One Direction tweeted, “I’m so fulllllll!!! Think I just ate my body weight in chicken fries and sides owwwwww.”

I'm so fulllllll!!! Think I just ate my body weight in chicken fries and sides owwwwww

Now the caveat is that Payne probably meant to say chicken and fries because the tweet prior he confessed his love for Colonel Sanders but let’s not go ruining narratives here.

Last summer, the fries of chicken variety returned as a temporary menu item. This past March – chicken fries were signed to a Major League contract and inserted in to the everyday starting lineup. No corresponding move was announced (baseball lingo, sorry).

The return of the fries has been so successful that Burger King added a second type of chicken fry, “fiery” to its menu.

And the point of us writing about this? Obviously as an excuse to eat them in studio. Don’t act like you didn’t see that coming.

I learned the difference first hand between the tabloids in the States and across the pond on Saturday. The British boy-band JLS joined “The Ralphie Radio Show” – and were quick to correct me when I cited a report that I read in The Mirror that the fellas hung out with Jay-Z and KanYe West in Los Angeles.

“It’s good that you ask, because we can squash (the rumors),” replied Marvin Humes, who called in to “The RRS” from the UK just a few months ago. “The Jay-Z connection has come from back home.”

Both Jay and JLS performed and won at The Brit Awards, which is similar to the Grammys. After the show, the “Empire State of Mind” emcee congratulated the boys at an after party by sending a bottle of champagne over to their table… of course, each person received their own bottle.

As for Mr. West, JB Gill revealed JLS has yet to rub elbows or receive gifts from him. The initial report also claimed the boys were introduced to both rappers by former Sugababes member Keisha Buchanan, also incorrect.
—
Download the interview

—
While we were speaking about what they did not do – Humes noted that they have yet to meet with J.R. Rotem, the man who produced “Everybody In Love” (along with half of everything else you hear on the radio these days). Yes, Aston Merrygold was photographed at Burger King but no, he never made it to In-N-Out Burger.

The guys did try Pinkberry for their first time – Oritsé Williams insisted he is addicted. Also while in L.A., the band wrote some new material for a forthcoming LP. Humes said that they worked with some big producers, including Toby Gad (Beyoncé’s “If I Were A Boy”).

JLS has also now encountered both the paparazzi in the UK and in the US. So, who’s more aggressive?

“We’re cool with both,” insisted Gill. “I’d say probably a bit more aggressive in the UK, obviously because we’re more known. But you know what, the paparazzi, they do their job and they help us – yunno, they give us press and they let people out there know what we’re doing.” 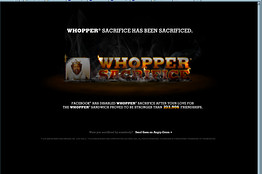 Would you do it? Details here.

Ralphie Aversa  —  04/03/2008 — Leave a comment
i wonder if he just throws a whopper jr. on there, or if he buys dinner for the whole fam and pays with plastic? we’ll ask tmz‘s michael hundgen tonight during the gallery of sound top 8 at 8.

Ralphie Aversa  —  04/03/2008 — Leave a comment
i wonder if he just throws a whopper jr. on there, or if he buys dinner for the whole fam and pays with plastic?

we’ll ask tmz‘s michael hundgen tonight during the gallery of sound top 8 at 8.