PHOTOS: A Weekend In NYC With No Work

My buddy Danny, one of my best friends from Pennsylvania, came in to town for his annual birthday celebration (his actual birthday was the previous Tuesday). What this weekend usually amounts to is three straight days of debauchery. This year wasn’t quite the 5 am-a-night marathon of prior years… at least for three straight nights. Danny had work early Monday.

But all bets were off Friday and Saturday. We met up with my friend Ryan at a private club downtown Friday night where we hung out until last call, then dialed up the venerable West Village dive WXOU Bar for a night cap, followed by a trip to my bodega for sandwiches and wings.

Saturday started with an excellent brunch at Westville’s Financial District location and continued with a few more Bloody Marys at Beckett’s while I screamed at the TV over the Syracuse game (they lost).

After a quick reset at my apartment, we grabbed dinner at Village Yokocho, an awesome Japanese restaurant in the East Village that also contains a speakeasy. From there we ordered a round at Tompkins Square Bar (there was a line at Niagara!) and then met friends at Rockwood Music Hall Stage 1. The live set wrapped at 2 am so we walked back to Avenue A and one of my favorite watering holes, Kelly’s, for some late night wings and Blue Lights. Night cap? You bet; it happened up the street at Sophie’s. Danny was craving pizza, so we made that happen at Little Italy Pizza, which is open 24 hours.

Now Sunday started a little differently; I Uber-ed round-trip to Whole Foods to buy the ingredients for my vegan Buffalo Chicken Dip, which I then promptly cooked before hitting the road. We had tickets for the noon Knicks game (they are awful), watching it at The Garden with a round of double-shot Bloody Marys (they are fantastic).


We bar-hopped a little, with a stop at my old neighborhood standby, The Dead Poet, before hailing an Uber to Ryan’s place so we could watch the Big Game and I could tweet out gems like this.

And with that, Eli Manning won his third #SuperBowl against Tom Brady.

After the game, none of us could turn away from the live streams of the celebrations (or, rioting) in Philadelphia. Finally at about 1:20 am, we called it and returned downtown.

After all, it was Monday. Danny had work in the morning.

Have you ever walked in to a place, surveyed the area and concluded that someone may have literally picked it up, turned it upside down and then placed it back on its right side? 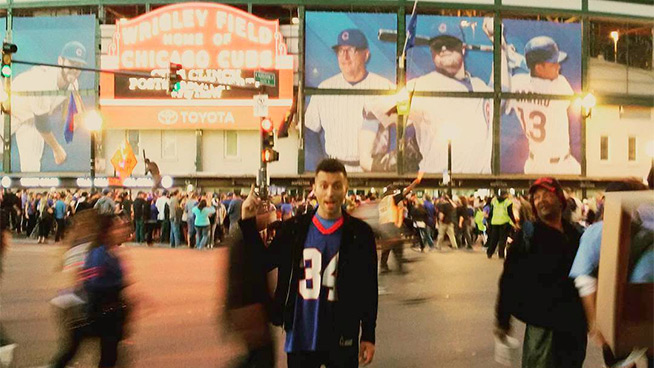 #TBT from my first trip to Wrigley Field last year.

This is how I felt at 3 am on Thursday morning as I walked in to Kelly’s, one of my favorite East Village haunts. I’m inherently a fan of Kelly’s because it serves as a home for fans of both my Buffalo Bills and Sabres. The wings (and for that matter, anything in the deep fryer) are delicious and the Blue Light is usually a plentiful.

Kelly’s is an interesting spot for a couple of reasons, one being that in addition to housing Bills and Sabres faithful, it also backs the Chicago Cubs and Bulls. So when the Cubs made the World Series, I knew exactly where to go and watch the game. Matter-of-fact, that is what I did for Sunday’s Game 5, a Cubs win in Wrigley.

Of course I was working during Game 7 but after the game finished, around 3 am, I jetted down to the Lower East Side to see if there were any revelers still celebrating. What I walked in to was a semi-madhouse. Keep in mind; it’s the middle of the week.

Forget stools, people were actually still just sitting right on the bar drinking. Or standing on a bench. You couldn’t find a part of the floor your shoes didn’t stick to. And the Blue Light is usually a plentiful, but the watering hole was actually sold out of bottled beer.

I love Kelly’s. Seriously the only thing that made me upset about any of this was that I wasn’t there when the final out was recorded. In lieu of that, here’s some video via Instagram of the celebration that ensued.

And what you didn’t see was the crowd OUTSIDE the bar, the width of the building and packed back in to the street.

It must have been memorable, because even at 3 am on a weeknight the place was still buzzing. I stayed for a couple of draft brews and then headed up Avenue A to another establishment that I feel a certain kinship towards: the venerable dive bar Niagara. I mean, I am from Niagara Falls after all.

The night finally ended at Sophie’s, which apparently has been an East Village staple for quite some time, although this was my first visit. There are $4 bottled beers, a pool table and a lot of regulars that like to hang out there, even at 4 am last call on a Thursday morning.

An Uber ride and Seamless bodega order later, my night came to an end. It definitely wasn’t how I had planned to spend my Wednesday night. I guess you could say it got turned upside down.

PHOTOS: A Few Scenes From The Weekend

A weird combination of events led to a string of nights out for me. In perhaps the most evident sign that a good time was had: the amount of photos I have from the weekend is scarce. But regardless, here are a few with context.

So when I signed off the air on Friday night, I headed to the East Village. There is a bar there that I’ve been wanting to have a drink at called Kelly’s. The pub positions itself as a “hockey bar” and specifically as a drinking establishment that supports the Buffalo Bills and Sabres along with the Chicago Bulls and Cubs.

Interesting mix, but I didn’t ask questions. The deep fryers stay on late, the Labatt Blue Light is cold and the Sabres were on a west coast trip – meaning the game didn’t start until 10:30p p.m.

Of course I showed up to support my team, and they even won! A great time along with a few chicken wings were had, and I’m looking forward to returning soon. Afterwards, I bounced around the East Village with a friend before making my way back uptown with a pit-stop at a go-to of mine, Jimmy’s Corner. It’s a dive bar in Times Square and it is fantastic.

It also wouldn’t be the last time I visited that spot over the weekend, although I did finally get to meet THE Jimmy.

On Saturday I made a rare appearance in Brooklyn. I ate thai food in Williamsburg with my old college roommate who I hadn’t seen in forever and his girlfriend who I hadn’t seen period. They have dated now for about two-and-a-half years but due to a number of circumstances, namely travel and schedule, I didn’t meet her until Saturday. She was lovely and it was great to catch up with both of them.

Then I literally walked around the corner from the restaurant to a house party my friend was having for her birthday. The plan? Stay for an hour or so, then head back to the East Village because the Sabres were still on the west coast.

What actually happened? I hailed a cab home around 4 a.m.

Sunday I made my way back to Brooklyn (who am I at this point?) to grab dinner with the birthday girl. We ate at this cozy little spot in Brooklyn Heights called Armando’s; the place has been around since the 20’s and Marilyn Monroe and some of the Dodgers were known to hang out there. We left the restaurant just as the Academy Awards were starting; the fine folks at OK! TV invited us to their viewing party in midtown at Refinery Rooftop, so we obliged.

That is the second and final picture that made its way to the Internet from my weekend. Although after the party I did have yet another opportunity to snap a picture in Jimmy’s Corner, but taking pictures in dive bars usually isn’t my style.