Archives For the ting tings

On WBRE’s “PA Live!” for this week’s “The Ralphie Report,” I reported on The Ting Tings, emcee Hoodie Allen, and Nicki Minaj’s return to Twitter.

INTERVIEW: The Ting Tings Choose Its Own Path to ‘Sounds From Nowheresville’

The Ting Tings are managed by Jay-Z’s Roc Nation. Jay is an artist who has managed to stay true to himself while maintaining relevancy. Jules de Martino and Katie White hope to do the same, and that alone could explain the four-year gap between the duo’s breakout debut We Started Nothing and its latest release, Sounds From Nowheresville.

“We have to tour this record for two years because of the time we took and probably the awkwardness that we behaved like almost to get it done,” White told me during my sit down with the English band. “We feel like we have something to say, which is [important] to us.”

The singer said she would have hated the alternative: to release an album that the band simply couldn’t or wouldn’t want to speak about.

Surely that thought crossed de Martino and White’s mind a few years ago. After a recording session in Berlin that yielded countless songs, the group played its record label 10 final tracks. Columbia executives were excited beyond belief; the duo was far from satisfied.

“We weren’t not feeling them because [Columbia] loved them,” White clarified of the songs. “We just felt like we had more to do really.”

A single from that session, “Hands,” would eventually make its way on to radio. The Calvin Harris-mixed track serves as the bridge between what was The Ting Tings’ first album, what could’ve been its sophomore LP, and what is Sounds From Nowheresville.

“We totally respect dance music and what it does,” de Martino noted. “What we didn’t want to do is just jump on a bandwagon of fads and trends.”

So the group took its rhythm-based, multi-instrumental act to Spain and wound up recording its second album amidst isolation.

“We started to realize we wanted to make a record that represented music how we listened to it,” de Martino explained. “We felt that this record we made represented a playlist of lots of different genres of music.”

But the playlist isn’t exactly on shuffle: there is cohesiveness to Sounds From Nowheresville. During the interview de Martino mentioned The Killers’ Hot Fuss and the rollercoaster of emotions and stories the album takes its listener on from start to finish. That idea is certainly mirrored in Sounds: the ride begins slowly with Silence, and seems to hit full steam by track three, the catchy in-your-face single “Give It Up.” Energy peaks two songs later in the defiant “Guggenheim.” From there, the tempo slows gradually to a near halting stop on the final track, “In Your Life.” Coincidentally enough, the group wrote that song in Berlin, and recorded it in one take.

“I really wanted to make [Katie’s singing ability] prominent on this album,” de Martino said. “So to contain it we felt well why not a nice way to end is rather than end on a big track, why don’t we just let the album live there in this space, so people can sort of reflect on it, and talk about it.”

The plan worked with me, as I asked the question de Martino hoped for: Why did you end the album on such a soft note? Thankfully for de Martino and White, neither will mind having that conversation for years to come.

The UK singer isn’t joking with that claim – all of her vocals from Traveling Like the Light are the demo versions – no retouching, no auto-tune, no thirty takes of one note. But just because she’s real, doesn’t mean she isn’t awkward, at times.

Sights From The Birthday Week…

As if I need another reason to love these people… The Ting Tings global site features the 97 BHT video of the group performing an acoustic version of “That’s Not My Name.” 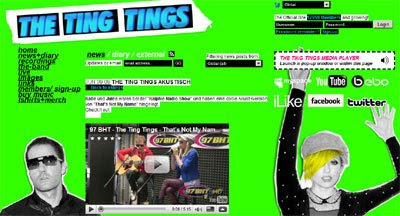 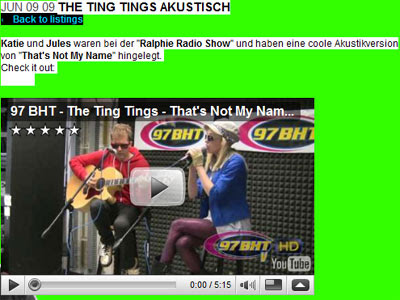 After The Ting Tings finished performing for 97 BHT listeners, Katie and Jules spoke with Ralphie inside the 97 BHT on-air studio about touring the states, Katy Perry, moaning with celebrities, and more…

Check out video of The Ting Tings performance here.
—
Ever wonder what musicians say to each other when they meet? The Ting Tings’ Katie White shares a little insight:

“All bands like moaning. We love to moan,” said White. “We saw Katy Perry the other day, and she moaned – and we had a good moan together.”

Perry seems to be quite the confidant to her cohorts – the songstress and Rihanna have been known to hang out. White says the two talked about “just girl stuff really,” like their hair and skin.

Of course, any type of acrobatics on a stage with Katie and Jules would be near impossible, let alone dangerous, given the amount of equipment the two uses to duplicate the vast array of sounds in their music.

“No, you’d have a guitar up your ass,” Katie joked – with Jules tongue-in-cheek challenging, “I bet Katy Perry couldn’t do that.”

The Ting Tings just wrapped up an American promo tour – and will run the Europe festival scene before returning to the States in the fall in support of Pink.

“I don’t know how many U.K.’s you can get in just a California,” said the other half of the group, Jules DeMartino. “You can do a two week tour in the U.K. or even a three week tour and that’s it, you’ve covered pretty much every corner.”

White also noted that in addition to the physical aspects, the media landscape is also vastly differently in the U.S., specifically involving radio airplay.

“If you get BBC Radio 1 and 2, you’re done really,” explained White. “It really is a shame in a way as well because if they don’t like your music, it’s really hard because they’re aren’t many other stations to get played on.”

BBC Radio’s reach is vast according to White, “literally every household.” Lucky for the pop-rock duo, BBC Radio loved their music, and the rest is history.

“We’ve got a map that we carry around with us, and we circle every town or city or state we go to,” DeMartino said.

And it won’t be too hard to figure out where The Ting Tings are going. First Europe – then the States with Pink – and then to Berlin – where Katie and Jules will write, record, and throw house parties in search of new tunes for the band’s second LP.

Thanks to Rodano’s in Public Square, Wilkes-Barre for providing free food!

This will be quick. I’ll be inundating you with posts soon… “The Ting Tings live”, “Bam Margera shows up to 97 BHT Summer Jam”, “I ignore The Veronicas”, “Gossip Girl’s Taylor Momsen talks new album”, “Jada Serenades Me for my Birthday” – and many more stories.

But first, thank you. 24 isn’t usually a birthday heavily celebrated, but because of you, and a few national recording acts, this by far has been one of the, if not, the best birthday.

I’m headed to cap off the weekend, Yankees game followed by a meet and greet with Mariano Rivera. Enjoy your Sunday, talk soon.

THE TING TINGS IN STUDIO!!!

So excited about this!!!

Join The Ting Tings live in the 97 BHT studios with Ralphie on Friday, June 5 for food, fun, and a special acoustic performance!

Keep it locked right here for the 411 on how to win your way in!

I always ignore Facebook apps, but this is hot: 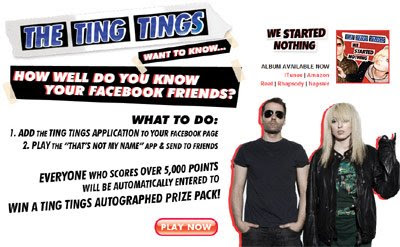 Of course, love the song as well – right on par with the rest of that LP.