If you’re craving new music from The All-American Rejects… well, you might not want to hold your breath for an extended period of time. Guitarist Nick Wheeler says the band hasn’t recorded a thing, yet.

“We’re hoping to be in the studio by the end of the year,” he said, after sounding bit surprised that lead singer Tyson Ritter told Rolling Stone something would be released by March. “We’ve been writing for about six months now, and we’ve got a couple handfuls of songs.”

Wheeler, along with drummer Chris Gaylor, sat down for an interview on “The Ralphie Radio Show?” amidst the band’s headlining trek for this year’s Vans Warped Tour. It’s AAR’s third trip on Warped, and first in five years. The boys from Stillwater, OK certainly have noticed changes.
—
Download the interview

—
“Yunno, there’s only one main stage now, there’s all these new young bands, there’s a lot of kids out there wearing neon plaid – I don’t get it!” he joked. “We were apprehensive about how we’d be received. I mean there’s no modest way of saying it – we feel like we’ve kind of ‘grandfathered’ this scene. We came around seven, eight years ago and were getting compared to all kinds of bands. Now, we’re the only ones left. It feels really great, but we were kind of wondering if these kids listening to all these new bands would get it.”

Both Wheeler and Gaylor say The Rejects have been anything but rejected, and that the response from the crowds each night has been overwhelming. The clothes and style may change, but thankfully for AAR, the music persists onward.

You know the premise by now – budding, raw talent builds following through social networking site, catches the eye of someone important, lands a record deal. Sean Kingston reached out to J.R. Rotem on MySpace, and then found the Island singer I-Yaz. MySpace is the same site that helped the career of Colbie Caillat. Priscilla Renea and Esmee Denters were both YouTube sensations before catching the eyes and ears of Capitol Records and Justin Timberlake, respectively.

Thing is, the story is becoming more and more common. While all the aforementioned artists have or are receiving airplay on mainstream radio – there are still others, waiting in the wings, with much more than a webcam to promote their talent.

The 23 year-old wrote, played, and sang for six years. She eventually decided YouTube might be the best outlet to perform, connect, and network until she could get discovered. Then in March of 2008, Kaprelian won an online contest for her cover of OneRepublic’s “Apologize.” Soon after, the band’s record label, Interscope, signed Tamar to a deal.
—

—
Almost two years later, Kaprelian will release her first LP, slated for February 2010. Tamar has split her time in the past 18 months between touring, writing, and charity work: the singer is just finishing a 30-day, 30-city tour for Feeding America. Kaprelian joined forces with the likes of David Arquette and The Cheesecake Factory for “Drive Out Hunger”, raising soup donations for the needy. After performing Saturday night in New York City, Kaprelian woke up at her usual 4 a.m. for the next stop – Edison, NJ. This is where I met up with her – to chat about the soup drive and the music projects – amidst the Menlo Park Mall – which echoed with the chants and cheers of caffeine-fueled workers accepting donations.

“I worked for Cheesecake Factory before I signed with Interscope,” revealed Kaprelian. “They’ve been so supportive of my music, and of my career, and so they asked me to get involved with this charity, and I said of course.”
—

—
The tour provides Kaprelian with quite the change of perspective. As we sat in an almost empty restaurant, people who worked a job she once held scurried about around us, setting tables and preparing for open.

“It is very surreal, but I feel very blessed,” Kaprelian said. At two different points during the interview, a server mistook us for two customers. Each time, Kaprelian stopped and thanked the person for attempting to wait on us, before informing them that we were just in the restaurant to take refuge from the noisy chambers of the mall.

Kaprelian wraps up the food drive on October 1, and then heads back to Los Angeles. She’s already worked on two tracks for the LP with OneRepublic front man Ryan Tedder – one of which Tamar reveals is a duet with label mate and All-American Rejects lead singer Tyson Ritter.

“It’s gonna be a cool record… he’s so talented,” Kaprelian said of her time working with Ritter. The collaboration wasn’t her first encounter with AAR – she sang backup for the group on “Ellen”, “Jimmy Kimmel Live”, and “The Tonight Show.”

Butch Walker also contributes to the project, which is yet to be titled. Kaprelian seems to be mulling over three options – Delicate Soul, It Is What It Is, or Sinner Or Saint.

The title may not be chosen, but the first single is: Kaprelian confirmed that “New Day” will be the lead song from the album. The track gained notoriety when MTV featured it in the last scene of Season 5 on “The Hills” – the track served as Lauren Conrad’s swan song. Kaprelian told me that she knew it’d be in the finale, but had no clue as to how and when it would be heard.

“You hope (the song is) at the end,” said Kaprelian. “I was over the moon. We were in the sitting room, and my entire family and I were watching it, and it was just such a great moment.”

Tamar was born in Arizona and also raised in Georgia. Like me, she is proudly of Armenian descent. I even learned something during the interview: apparently Gwen Stefani is also Armenian.

“Family is important to us,” Kaprelian said. “(My family has been) beyond supportive. They’re really happy for me. I think they’re just proud that I get to do what I love to do every day.”

With the recent addition of a third song to iTunes, a radio promo tour set for January, and an LP to follow – the Kaprelian’s will have much to be supportive for, as Tamar will be doing what she loves on a daily basis for the foreseeable future. 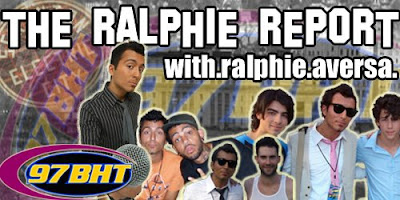 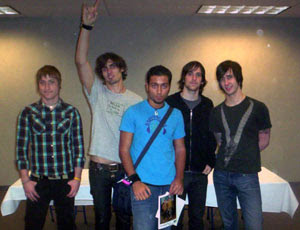 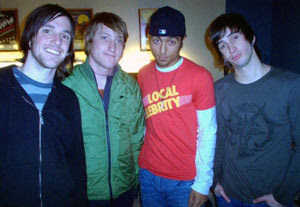 The All-American Rejects’ Nick Wheeler assures Ralphie that Tyson Ritter isn’t mad at him. Nick also discusses “The Office”, college, the Rejects career, and the new LP, “When The World Comes Down” – which drops this Tuesday (12/16).