Nicolay “Nico” Sereba of the duo Nico & Vinz called “Ralphie Tonight” from Europe where the musical act was supporting Usher on tour. Nico chatted about the band’s upcoming North American tour and offered some insight as to when the duo would be back in the studio creating new music.

Tickets are on sale now for Nico & Vinz’s May 19 show at Irving Plaza.

I covered radio row and the red carpet for Fashion Rocks at the Barclays Center with Westwood One. Watch my interviews with Usher and Nick Jonas and listen to Afrojack, John Varvatos, and Nico and Vinz chatting on “Ralphie Tonight.”

The “hardest working man in showbiz” moniker is tossed around quite a bit these days, but Cee Lo Green is one who may actually be quite deserving of the title. His current mid-week stretch is one to marvel at.

“It was even later than the red-eye, because it was delayed due to whatever weather was going on here,” Green said of the flight he took in to New York Wednesday morning. “The Voice” coach performed live in Los Angeles with Kermit the Frog as a part of the TV show’s Tuesday night episode. Then, Green linked up with The Muppets and sang at the Rockefeller Center Tree Lighting Ceremony in Manhattan. “Yeah man, I’m right out of here in the morning, going back to do ‘The Voice’ tomorrow.”

The “Forget You” singer, who squeezed in an exclusive studio visit to 95.5 PLJ’s “The Ralphie Show” after the tree lighting, doesn’t take his hectic schedule too seriously.

“Don’t give me too much credit man, I just don’t have a choice,” he said before letting out a laugh. “I’m doing what I love man, so it seems a lot less than work. I really enjoy what I’m doing.”

Green just released, Cee Lo’s Magic Moment, a holiday album that features covers of classics and collaborations with A-listers, from his fellow “Voice” coach Christina Aguilera to the aforementioned Muppets.

“Almost everyone grew up with the Muppets, and I’m just a big fan,” he said of the song, “All I Need Is Love.” “I’m really just gracious that they would just honor me with their presence and allow me to collaborate with them.”

Cee Lo also took on Mariah Carey’s “All I Want For Christmas.” He received Mariah’s blessing through her husband.

“Me and Nick (Cannon) have been friends for years,” Green said. He saw Carey, who also performed at Rockefeller Center, on Wednesday night.

Usher Raymond is another one of Green’s friends; the two grew up together in Atlanta. Raymond will replace Cee Lo next season on “The Voice.” At first, Green admitted he didn’t know how Usher would fare.

“It takes an awful lot of personality and quick wittiness at times, but he is very accomplished,” he said. “I know him very well and if I was to share the seat with anybody, it would be him.”

Green will be taking season four of the singing competition off to take part in a plethora of projects – from a Las Vegas residency and a solo album to an autobiography and a new Goodie Mob release.

“We’re well in to that,” Green updated on the Goodie Mob project. “Looking forward to releasing that at the top of the year.”

Apparently Green hasn’t forgotten about you Gnarls Barkley fans, either.

“I just talked to Danger Mouse recently, and we’re going to try to squeeze it in,” Cee Lo revealed. “Just knowing him and our chemistry, things kind of flow pretty quickly. So, I don’t really know what new page he’s on production-wise, but I’d be really, really excited to hear what he’s working on new, and I’ll dial right in.”

At this pace, Green would have to take two seasons off of “The Voice” to complete everything… thankfully, he clearly has no issues with running a full schedule.

The beat does sound a bit like Afrojack “Can’t Stop Me Now.” Anyways, Luda’s new album: LUDAVERSAL, is due out early next year.

“We all have those things that happen, whether it’s falling on stage or having those moments,” said the artist, born Usher Raymond, in a phone interview on “The Ralphie Show.” “But you know what’s cool? That makes you human.”

Usher said there were times during his career where he ate something bad before taking the stage. Of course, the big difference now is that there are 20,000 people in the crowd who are all armed with Internet-ready cameras.

The performer is no stranger to cameras either – and he’ll be willingly in front of them next season as a coach on NBC’s “The Voice.” Despite reports to the contrary, Usher says his involvement thus far has been, “a really great fit.”

“We’ve actually been able to meet, greet, have a good time out in Los Angeles and the show’s gonna be incredible man,” he said of his vibe with fellow coaches Adam Levine and Blake Shelton. “It’s a respectful place, a respectful vibe. I came in and had a good time. It’s been pleasant man.”

Usher is especially looking forward to coaching, mentoring, and showing America a different side to his personality.

“I think what they’ve done with the talent that they’ve coached… they go through the process of finding people who are at least at a place where they can either take constructive criticism or they be a part of the show and we really help make them the artist that they can be.”

Meanwhile for the Atlanta-based singer, he is continuing to diversify and build off a recording career that has spanned over 20 years and 65 million records sold worldwide. But while he is getting in to television and wouldn’t rule out a possible return to Broadway or off-Broadway, Usher is also trying to enjoy himself a little. He recently celebrated his 34th birthday in London.

“I had to get out a little bit, and had some friends and family at a club or something like that, and then on to the after spot,” he recalled. “We just had a good time.”

Usher would eventually elaborate a little more – noting that after a big birthday dinner, he linked up with Tom Cruise and a few other people for the night cap. But to put it in his context – the “major joint” would be the celebration for birthday number 35.

“Numb” is the next single from Usher’s latest album, Looking 4 Myself. The LP features a mix of both up-tempo dance tracks and baby-making slow jams. This one, produced by Swedish House Mafia, falls within the former.

AUDIO: ‘Without Poo’ (Parody of David Guetta f. Usher’s ‘Without You’) 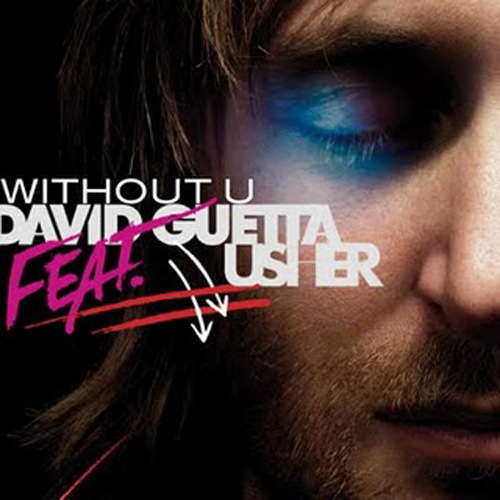 Here’s the next single from the French DJ’s latest album, Nothing But The Beat.

Here’s the next single from Euphoria. The original featured only Usher, the label added Lil Wayne to the radio remix.

In a radio interview to promote his show at the Dunkin’ Donuts Center in Providence, RI on May 4, Usher all but avoided directly answering a question by 92 PRO-FM’s Jessica Schiano on whether he and Rihanna were involved romantically.

(FF to 2:43)
“I’m not on the phone to dispel anything,” responded the singer when Schiano asked him if he was hanging out with someone whose name “rhymed with Rihanna.” “You know, artists, we have friends… people definitely see something that might not always be what you think it is.”