Big thank you to Good Charlotte’s Joel Madden, who was kind enough to send a link out on Twitter to my interview with him and brother Benji. Joel only has about, yunno, 480,000 + followers… 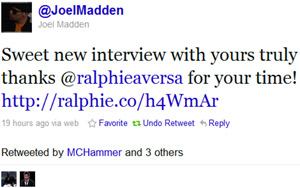 What’s even cooler? M.C. Hammer follows Joel, saw the link, and sent it out to his 2 million followers.

EXCLUSIVE: Joel and Benji Madden Talk Life on the Road – Over a Decade Later

Turns out for Joel and Benji Madden of Good Charlotte, “Lifestyles of the Rich and Famous” aren’t so bad after all.

“We don’t walk around all day and say, ‘We’re rich and famous!’ Joel clarified when the brothers sat down on “The Ralphie Radio Show.” “We’re happy with our lives, good or bad.”

Lately for the twin brothers, and the band, there’s been more of the former: Good Charlotte’s headlining tour is selling well across the country, Cardiology is in stores, and Joel even gets his fantasy football tips now from ESPN’s Senior Fantasy Analyst Matthew Berry.

But more important than all of that for the lead singer is the “balance” he has in his life, between both his rock star job and his family with wife Nicole Richie and children Harlow (3) and Sparrow (2).

“The kids come out here and there and that’s always different, like there are two different kinds of touring,” explained Joel. “There’s the touring without the family, which is kind of like a little Dad vacation. Then they come out for a week here or there and that’s like, full-time family, but it’s a nice mix.”

“Obviously, we’re not like we were when we were 20 years-old,” Benji continued. “Now we all lead grown-up lives and we still love being together and music is the best job you can have.”

Joel noted another perk of the gig: flexibility. 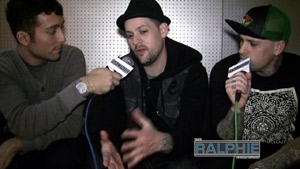 “There’s a lot of freedom in what we do, and we get to make our own rules,” he elaborated. “It’s interesting, because being in a band, a lot of the times the stories you read about people and things that people tear other people down for, we get away with a lot more of it because we’re in a rock band and we’ve been on the road for 12 years.”


The lead singer may have been alluding to the recent trials and tribulations of another famous father: Charlie Sheen. Thankfully for Joel and the band, there have been no public headlines that have interfered with their career.

“That was always the plan, to do this as long as we could,” Benji said of leading a grown-up life while still recording and touring, and not after the fact. “We love music, we love our band, and that’s why the people who love us, love us… it takes a certain type of person to make music.”

Benji’s comment elicited a reaction from his brother Joel.

“And it also takes a certain kind of a woman to be with a guy that’s always gone here and there, and traveling.”

“I had been in the studio from noon to midnight for two months straight, working on that,” revealed Joel Madden of exactly how much he poured in to the first version of Good Charlotte’s new album Cardiology. “(It was) about half way (done)… maybe a little more.”

But the band didn’t agree with the “single-driven” approach of producer Howard Benson – so the group stopped, scratched everything recorded, and started fresh with Don Gilmore. This pushed back the release of the LP to November 2. The first single, “Like It’s Her Birthday” is currently gaining airplay on radio stations across the country.
—
Download the interview

The Madden brothers talked about the lead single as well as the song “Sex on the Radio” off the album, which drops November 2.
—
“There’s a few birthdays I don’t remember, and there’s an album cycle I completely… just doesn’t register,” joked Benji Madden… or at least, I thought he was kidding. “The third record (The Chronicles of Life and Death), I really can’t make out much.”

You might assume that the harder partying days are behind the Madden brothers – especially for Joel – who is now the father of two children and engaged to Nicole Richie. The lead singer also campaigned for Barack Obama during his 2008 Presidential bid. The Madden’s are from Maryland, but Joel’s work didn’t earn them any special trips to 1600 Pennsylvania Avenue.

“Forget about surviving 40 years in the music business,” Lionel Richie told the audience. “Just surviving 27 years of Nicole Richie has been a struggle-and-a-half, I want to tell you. I stand here as a survivor, I want you to know, for all the parents out there.”

wonder what his son-in-law thought of that?

“Forget about surviving 40 years in the music business,” Lionel Richie told the audience. “Just surviving 27 years of Nicole Richie has been a struggle-and-a-half, I want to tell you. I stand here as a survivor, I want you to know, for all the parents out there.”

wonder what his son-in-law thought of that?