Technically there are two guests in this episode of, “Hey, Really Excited.” The title-guest is the talented and lovely Leona Lewis, who is dropping a new album this September. She talks about the creation of ‘I Am’ and performs the single, “Thunder.”

The second? Race Taylor, who I teamed with for the Leona interview!

I’ll also update you on my summer travels and I recap my trips home to Niagara Falls and Randall’s Island for Urban Mudder.

INTERVIEW: It Took Leona Lewis Almost Two Years To Do This…

On September 4, 2014, Leona Lewis wrote a letter to her fans. Posted via a snapshot on Twitter, the singer talked about a “rollercoaster year” and “taking the huge step away from Syco and Sony.” Syco Entertainment is Simon Cowell’s record label; Lewis landed with Cowell after winning “The X-Factor” in the UK over eight years ago.

But after four albums, including one of the holiday variety, Lewis felt it was time for a change. She left Cowell for Island Records, and a year and a week to the date of dropping that open letter, Lewis will release her new LP I Am.

She does not find the timing too significant though.

“I didn’t even realize it would be a year,” she told me. “It wasn’t planned like that. Naturally it just happened that the album was kind of done around then and it was time to release it.”

Lewis later clarified that she had been working on this material for much longer than six or seven months; rather almost two years.

“Before (the letter) I had gone out on my own and started creating the album,” Lewis noted. “I was making it but I didn’t know what label I was going to sign to or what was going to happen.” 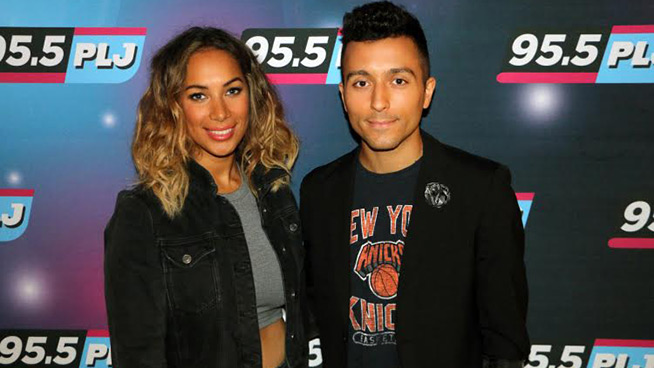 This album started by Lewis simply creating music with no other purpose or plan besides the creation itself. She collaborated with super-producer Toby Gad (“All Of Me,” “If I Were a Boy”) and their work led to I Am.

Outside of a track penned by Diane Warwick, Lewis and Gad receive writing credits on every song. Other writers who contributed to the LP include Anne Preven and Wayne Wilkins. There are no featured artists on any of the songs outside of Leona.

“I think for this album it was so important to just kind of have it as my own thing because it was so personal,” she explained. “So collaborations as far as producers yeah, but not artist-wise.”

Lewis will drop I Am on September 11. The first single at U.S. radio is called, “Thunder.”

You may not have heard much from Leona Lewis lately, but that doesn’t mean the “Bleeding Love” singer is sitting idle.

“I’ve been recording my album,” Leona told “The Ralphie Show” on Wednesday. “I’ve been touring as well. Yeah, I’ve been doing this in bits and pieces.”

The latest piece is Christmas, With Love. Lewis recorded the holiday album over the summer, and it hits shelves on December 3.

“Literally, when I started recording in the summer time, obviously British summers are not known to be really hot,” Lewis explained. “But, it was literally the hottest summer ever. So it was so weird recording when it was just kind of beaming hot outside.”

Like her label mate Kelly Clarkson, Lewis did decorate the studio a little bit to get in the spirit. With so much time thinking about the holidays, the singer also already knows what she wants from Santa.

“I actually want a gramophone,” she revealed. “I really want to play some old records at Christmas.”

Lewis also talked about some of her family traditions, such as opening up one present on Christmas Eve. Then of course, there’s that final night before the big day – or as the singer calls it on her holiday single, “One More Sleep.”

“The song is about waiting for Christmas day and waiting to see your family, your friends,” Lewis said. “I get really, really excited about it. So it’s basically that night before Christmas kind of feel.”

Yes, when Lewis was younger, she even went as far as to leave cookies for Mr. Claus himself before that last night. Miraculously when she would wake up, there would only be crumbs left.

EXCLUSIVE: Shontelle Continues to Keep it Real with ‘Say Hello to Goodbye’

Any good singer and/or songwriter says that a hit record that resonates with people has real emotion in it. And if there’s one thing pop star Shontelle Layne does not lack, it’s real emotion in her songs. For example, there was an actual guy and a “T-Shirt” which inspired her first hit. The Bajan singer’s biggest single to date, “Impossible” – was also relatable at the time she recorded it. Now, comes “Say Hello to Goodbye,” Shontelle’s next single from her sophomore LP, No Gravity. Apparently when she went in to the booth to cut this one, the emotion was almost too real.

“I was going through something at the time, and it was so real to me,” said Layne of the track during an interview on “The Ralphie Radio Show.” “It took me over two days to record it, because the producer was like, ‘Dude, okay, I get it about being real, but honestly, you’re crying so much we can’t even understand what you’re saying.'”

Layne took the rest of the day off and ordered room service before hopping back in to the studio. Martin Hansen produced the power-ballad, which is a slight departure for Shontelle’s R&B/pop sound in that it does mix in some heavy guitars.

“When I first thought about doing, ‘Say Hello to Goodbye,’ everyone was like, ‘Are you crazy? This sounds like a pop/country/rock ballad. What are you doing? No one is gonna get this from you,'” she recalled. “I just feel it… it just feels right.”

Shontelle can only hope that her audience feels the same way about “Say Hello” as they did about her platinum-selling single, “Impossible.” Funny thing is, that song almost wasn’t even Shontelle’s to sing – Leona Lewis turned it down first.

“Maybe (Lewis) just couldn’t relate at the time or what, but it worked out for me,” Layne said. The singer knew of the rumor of that “Impossible” was offered to Lewis first, but didn’t receive confirmation until a recent trip overseas. “Thank you Leona! You’re my home girl.”

Shontelle was overseas touring the UK with Jason Derulo. She believes the two will link up sooner rather than later in Miami to collaborate on a track. Meanwhile, Layne is preparing for her own tour across the U.S. – which she hopes to kick off later this year.

He’s the lead singer of OneRepublic. The guy’s band is currently on tour with Rob Thomas. The group is releasing a new LP this month. He’s also writing and producing some of the biggest hits on radio for some of the most popular artists. But if you’re Ryan Tedder, you know you’re busy when you miss the deadline for Rihanna’s new album.

“(Laughing) Man, that week literally, I was working on stuff, and they were closing out her record, and I just missed (the deadline) by the cusp,” Tedder revealed. OneRepublic’s front man called in to The Ralphie Radio Show while on the road, and sounded optimistic about a future opportunity to work with Rihanna. “I mean, I know they’ll be repackaging it at some point. Yunno, they repackage everything at some point, so. I talked to her label and I’m definitely gonna bring some heat for the reissue.”
—

—
Rihanna’s last LP, Good Girl Gone Bad, spawned Good Girl Gone Bad: Reloaded, which included the mega hit, “Take A Bow.”Other projects that Tedder worked on included the new release from Leona Lewis (Tedder co-wrote “Bleeding Love”, and wrote her new single, “Happy”) and Adam Lambert’s For Your Entertainment. Tedder is responsible for the song, “Sleepwalker” – which he predicts will be a radio hit. Another big song prediction of Tedder’s is the next OneRepublic track, “Secrets”

“It connects, man,” Tedder noted of the song, which already reached the top of the iTunes sales charts overseas (The German movie, Zweiohrküken featured “Secrets” on its soundtrack). “We have a lot of high hopes for ‘Secrets’.”

While the song is reminiscent of the sound that made Dreaming Out Loud such a success, if it doesn’t take off in the States, it wouldn’t mark the first incorrect prediction by Tedder. The songwriter admits he is still learning the skill of marrying the right song to the right artist, and cited Jennifer Lopez’s “Do It Well” as an example.

“It sounded like such a hit for her,” said Tedder. “It was kind of one of those deals where, I think people just really didn’t care. They were kinda like, ‘Eh, J-Lo, whatever.’”

Clearly, Tedder hopes for a different reaction when OneRepublic releases their sophomore LP, Waking Up, on November 17.