In Touch Weekly Senior Reporter Andrew Nodell recapped a rather interesting interview Snooki gave the magazine, in which she admits that she might be a bad mother.

Nodell said Snooki believes she might not be a good mom because she’ll be too lenient towards her child.

“We find out as much as everyone else does,” Cortese told me before her appearance inside Mohegan Sun at Pocono Downs. “I honestly don’t know what I’m walking in to.”

The cast returns to Seaside Heights this summer to film season six of the hit reality show. In addition to Snooki’s forthcoming child, Mike “The Situation” Sorrentino just finished a stint in rehab.

“Nicole is supposedly coming down,” the “blast in a glass” said. “I mean she probably won’t be drinking with me. But, Nicole and her personality, me and my personality, you don’t even need alcohol to have a good time.”

Well, let’s not get ahead of ourselves here. Surely regardless of Snooki’s soberness, there will be plenty of the usual shenanigans that fans of “Jersey Shore” have come to expect. Deena did say that she also expects that some of her friends will visit while she’s in the house.

“Give me music and a bar, and I’ll just dance on it really,” Cortese continued, attempting to convince me that she doesn’t need liquor to party.

There is one thing that the “walking holiday” definitely can do without: her cell phone. This is definite, because all phones are confiscated once taping commences. Cortese revealed that the cast’s isolation from the outside world can sometimes benefit it.

“Say you’re on your cell phone and something happens outside the house, and it completely changes your mood; like [the producers] don’t want that to happen,” she explained. “My first time I was in the house, thank God they kept all that stuff away. No one knew about me… and they were trying to find every skeleton in my closet, and all these lies were going on about me throughout the media. But I had no idea so I was completely fine in the house.”

Deena has certainly adapted to life in the spotlight – accumulating over a million followers on Twitter in the process. Her boyfriend of seven months however, prefers to stay away from the cameras, and may not be seen regularly on the upcoming season.

“He’s not really in to the limelight, and people knowing about his business,” Cortese said of her beau, Chris Buckner. “Hopefully he does [come to visit], even just to get lunch or something.”

Cortese assures though that despite her relationship status, she is still the same partier that viewers have come to both love and loathe.

“I’m the same blast in a glass, he knows I’m a meatball,” she said. “As long as I don’t cheat on him, me and him will be fine, and I would never cheat on him.”

But, for better or worse, what happens in Seaside Heights ends up on MTV. So one way or the other, we’ll all get to see if Deena is true to her word next season.

“Jersey Shore” cast mate Snooki dropped a couple bombshells, err… meatballs, this week. Nicole Polizzi confirmed to US Weekly that she is pregnant with a child and that the father is her new fiancé, Jionni LaValle.

Holyyscoop.com’s Diana Madison checked in to “The Ralphie Radio Show” with celebrity reaction and her own insight on the future of the hit MTV reality show.

RT America: Weighing In On ‘Snooki-Mania’

I was happy to accept an invitation from Alyona Minkovski to appear on her show, “The Alyona Show”, which streams live at 6 p.m. world wide on RT.com/USA and airs in New York, Los Angeles, and Washington D.C.

Alyona and I spoke about the emergence of MTV’s “Jersey Shore”, specifically “Snooki”, as a symbol for America, and what it might say about our country and its culture to those who don’t live here.

Big thanks as well to Patrice Innocenti for helping to book the segment! 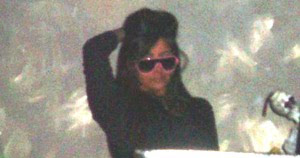 Much is being made in the media over Nick Jonas and his new project: Nick Jonas and The Administration. How successful will they be? Are the Jonas Brothers no more?

The chatter is growing louder after E! News reported that Joe Jonas is now writing songs off on his own, with other musicians that don’t share his last name. However, the man the brothers refer to as “The President” told me exclusively on “The Ralphie Radio Show” that his brother Joe did recently talk shop with one artist – U2 front man Bono.

“The main thing that Bono was saying, was to just be honest with your music,” revealed Nick on his second-hand account of the conversation. “Yunno, when you write your lyrics, write things that are real to you. And don’t be afraid to be too honest.”

It seems the youngest of the 3 musical brothers already picked up on those traits though. Nick wrote a bunch of honest songs – and honestly believed they weren’t for the Jonas Brothers. He told Joe and Kevin how he honestly felt. Now Nick has an honest chance of breaking the stereotypes of an artist cultivated by the Disney machine and to be perceived as well, an honest musician.

Jonas offered up, sorry last time here, honest answers during our conversation, which lasted over 10 minutes. Apparently, the inspiration behind “Stay” – a song written after the initial recording process of the new album – is quite authentic.

“I actually wrote that song in (Washington) D.C. on a day off that we had, a couple weeks ago,” said Jonas. “I was going through some things in my life and that kind of inspired the song and it’s always good when you can pull from real inspiration and real stuff in your life.”
—

—
Nick seemed equally surprised and impressed that fans already know the lyrics simply from YouTube videos of the live performances. Jonas said the band recorded a studio version of the track recently in Boston, and that it will see the light of day somehow – possibly in an album repackage or as an iTunes bonus.

It’s also been reported that at one show recently – fellow Disney star Selena Gomez was crying as Jonas played the song. The two were recently photographed together in Chicago and ended up on the front of TMZ.com. I reminded Nick that while I’m sure he’d like to keep his personal life just that, he should still be happy that he’s relevant to the point where people care.

The conversation did not stray from music-related topics often, but the TV show “Jersey Shore” did come up. The Jonas clan was raised in Wyckoff, New Jersey. Nick heard of the MTV show, but has not seen an episode.

“I did see the YouTube video of Snooki, I believe it is, getting punched in the face,” he admitted. “For me personally, I feel like, coming from New Jersey, and going from that area, which, if you’re from that area, you just know that that’s kind of what it’s like. And so for people across the U.S., they’re thinking, ‘Wow, this is crazy, I’ve never seen this.’ But for me, it was like, ‘Man, that’s home.’”

Jonas still has a couple friends from Seaside Heights.

That album by the way, Who I Am, hits stores February 2. Jonas is in the midst of a 22 date-tour – a trek that he admits is much more scaled down in venue size and production from the massive schedules he embarked on with his brothers. Nick says it’s not a coincidence – as the group tries to center each performance on the music itself.

“This project in particular for me was about just being able to express myself as an artist and as a musician,” he said. “Hopefully, people will respond well to it.”

Meteorologist Snooki With The 7-Day…

Her show airs on MTV. Jay Leno invited her on his ill-fated prime-time show twice. She receives $10,000 to appear at clubs and events. Yet still, it seems America can’t get enough of Nicole Polizzi – known to the masses as “Snooki” from “Jersey Shore”. In her latest cameo, Snooki trades in lush background of Seaside Heights for a green screen on New York TV station WPIX.