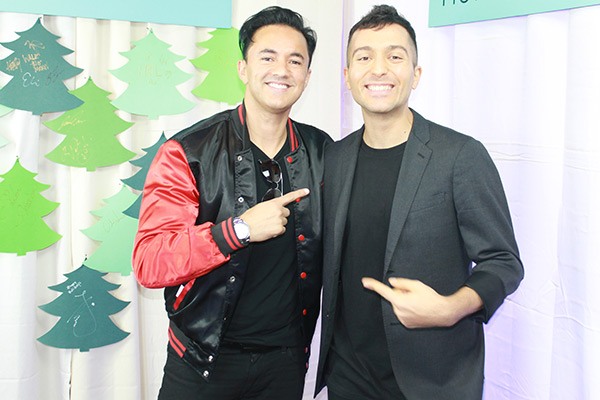 It wasn’t too long ago that singer J Randall was bumping “Bartender” in his car. Now the 24 year-old is collaborating with the likes of T-Pain and other high profile people, including producer RedOne and YouTube star Keenan Cahill. J checked in to “The Ralphie Radio Show” from South Florida to chat about his single, “Can’t Sleep” and how he and Cahill linked up in Chicago to film a hilarious lipsync video of the song.

Australian guitarist Orianthi has jammed with the likes of many: Michael Jackson, Carrie Underwood, and even Alice Cooper last week on the finale of American Idol. But here’s a collaboration you may not have foreseen – producer RedOne.

“I guess it was just put together,” explained Ori of the partnership – which yielded the track “Addicted to Love.” The song is one of four bonus tracks that will appear on the re-release of Orianthi’s album, Believe (II). “Yunno it was really cool, and (we had) a lot of fun in the studio.”

If you’re unaware of RedOne, he’s a big time music maker who is behind a lot of Lady GaGa’s big hits (artists usually sing the producer’s name in the beginning of the song). Orianthi and GaGa are housed under the same label group – could that be a collab right around the corner?
—
Download the interview

Believe (II) comes out this Tuesday.

—
“That’d be really cool, hopefully,” responded Orianthi of the prospects of such a tandem. The singer/guitarist has yet to meet GaGa.

The Aussie made time for “The Ralphie Radio Show” before kicking off the “Glam Nation” tour, where she and former Idol finalist Allison Iraheta will support Adam Lambert. Ori is pumped about the tour, and apparently the show’s name gets her even more excited.

“The fact that it’s called ‘Glam Nation’ just gets me excited,” she said. “Just the whole like, glam and you know, I’m in to sparkles and extravagance and I’m just super excited about getting out there and rocking out.”

Universal Motown’s Jada stopped by The Ralphie Radio Show to catch up and play the group’s new single, “Breakup Song.”

Part 2: Catching up since Summer Jam

When you’re the runner-up on a show as popular as American Idol, surely you’ll accumulate a few new contacts in your phone.

“Hmm… the most famous contact in my phone?” Adam Lambert pondered before answering, “Elton John.”

That immediately begs the question: Do Adam and Sir Elton talk or text?

It’s almost anti-Adam that he didn’t follow through on specifics of his relationship to Elton. Lambert admits that he’s been very open and honest since AI ceased – first revealing (or maybe in some cases confirming) his sexual orientation to Rolling Stone, then directly confronting the public release of material he recorded well before his run on Idol.

“My mom was funny, because she was like, ‘I wouldn’t have gone in to detail about this, this, and this,’” Lambert said of his mother’s reaction to the RS cover story. “Why not just address everything right off the bat, before my career really starts, and kinda be an open book?”
—
Download the mp3

Since the two aforementioned issues, it seems there are no more skeletons in Lambert’s closet. But that doesn’t mean the singer is free from rumors and gossip. During our conversation backstage before American Idols Live, Lambert revealed Better Than Ezra’s Kevin Griffin is not possible songwriter for Lambert’s forthcoming LP. Griffin told MTV News that he wrote for Lambert, describing the Idol-alum’s sound as a mix between Fall Out Boy and Kylie Minogue.

“I don’t know who Kevin is. That was actually a surprise to me, when I read that on MTV,” said Lambert. “We haven’t talked to him at all. He hasn’t written anything… we don’t have any of his songs.”

Despite this, Griffin’s appraisal of Lambert’s November 24 debut may not be far off.

“Yunno, I’ll give him credit. I don’t know how he can write a song, but he certainly can give good quotes,” Lambert joked. “I wasn’t hating on him for it, I had just never heard of him before.”

Lambert himself described the LP as an audio version of playing dress-up. After the Idol tour wraps up, he’ll focus on picking around 12 songs from a list of 20. Also on the docket is a photo shoot for the album – as well as a title – which Lambert says won’t be picked until the track listing is set.

Confirmed by Lambert as a collaborator on the LP is Lady GaGa’s producer, RedOne. The Idol runner-up reached out to GaGa herself – but due to scheduling conflicts they were not able to team up.